The novel of Rattle, good execution, but without reaching the sublime.
I never get tired of listening (and sing) the Beethoven’s Ninth Symphony, usually called coral. It is a work of unusual perfection, not only technically but by its ability to arouse emotion in the listener (and not to say in who sings it). I am not exaggerating if we are facing with one of those masterpieces that have become by its own right in a monument to humanity, to universality. Yes, it is one of the works that has transcended and will always be a symbol.

That being said, this server, after having heard so many versions, considered the legendary recording of Wilhelm Furtwängler as the paradigm of how it should be and I always take as a model this perfection.

After the cancellation of the Magic Flute (by budget… or other matters), was proposed Rattle to make this symphony with the Berlin Philharmonic wonderful features. This was, without a doubt, an event; We are talking about one of the best orchestras of the world and one of the best current Conductors. Pity, however, have not used with another work that not so often played, let us not forget that days before López Cobos had done all the symphonies in the day of music.
In this framework, yet the expectation was maximum so assumed the interpreters and did not disappoint at all. Rattle makes a very personal interpretation of the Symphony. Play with different details, changes tempos, tries to put all subtleties to further enlarge the result. Fabulous how he accompanies every movement, practically helping each instrument to make a crescendo, an arpeggio and a pizzicato. It was precise to limit, attent to everything that was emerging and adapting to the changes. What a Super address of one of the current biggest. How much energy displayed on all four sides.
If it has an orchestra in which each instrument is a virtuous itself and, in addition, bind perfectly with his companions, of course, the result is excellent; I’ll stick with the climax of the first movement Allegro, exquisite and exciting, all the movement that aimed to this dark and bitter end; or the handling of strings in the third movement adagio, as were the violins in that gem that movement is, that close to the sublime; that exceptional each of the solists: the oboe and flute to give examples to a wonderful interpretation.

However, the but came in the last movement, just the coral; from the entrance of the bass solist Ivaschenko, who screamed, in a sort of Declamation rather than a line of singing, his initial intervention, everything was a little decaffeinated: the solists were adequate but without fanfare, very beautiful voice of Tilling but insufficient, was not heared too much; Kaiser the same, at least their part solo was more appropriate than the bass; the most complete was the contralto of Stutzman, with great projection and brilliance.

I think the tempos and the way in which this last movement has thought by Rattle is not suited, some of them were extremely slow, for example the leak or the final presto. And unfortunately they did not help to highlight the musical part; while the choir of the Teatro Real deserves an aside, it was exceptional; how easy is to sing the ninth shouting, done by almost all the choirs; but sing it as they did, is quite difficult. We must not forget that they are twenty minutes at the highest level of range and power demand and any possible worming that would have been done is just forgotten when it comes the time, it is began cold and you do not have time to revive. Such is the intensity of this work. Then, even dow Rattle went so slowly that could have killed any choir, this did not give any sign of fatigue and was, I am not exaggerating, excellent. In fact I want to make a subsection in favor, especially tenors rope (I can’t help it, I’m too…); the beginning of the fuga was the example of how it should sang; the overacute «A» that was bright, full, superbly placed, overwhelming; all the performance was a prodigy, as the whole choir.
Conclusion: great ninth, without reaching excellence, but, honestly, I would go to see Ratlle and the Berliner Philharmoniker whenever they appear. It is a real luxury to hear them.
Symphony No. 9 in D minor, op 125 of Ludwig van Beethoven.
Solists: Camilla Tilling (soprano), Nathalie Stutzman (contralto), Joseph Kaiser (tenor), Dmitry Ivaschenko (bass). Holder choir of the Teatro Real. Choir Director: Andrés Maspero. Orchestra: Berliner Philharmoniker. Musical Conductor: Sir Simon Rattle.
Teatro Real of Madrid, June 28 2013.
Mariano Hortal 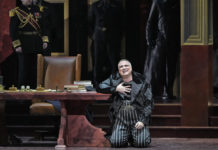 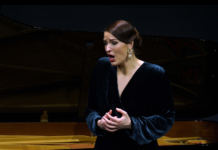 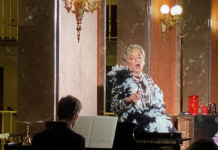