There are some theatres in this our country where the seasons are designed with the aim of «educating» their member´s taste for music -same ones who contribute with their taxes and by paying the tickets. Luckily there are many other theatres who´s only aim is to offer quality. Quality on their proposals, performers and what is unusual nowadays in this atmosphere ruled by snobism, they offer quality regarding musical directors.

Nowadays, no one can deny that Comunidad Valenciana’s Orchestra and Generalitat Valenciana’s Choir are among the most versatile and high quality ones we can find in Spain. Throghout the years and despite their youth they have easily achieved good results when conducted by first line Musical Directors such as Gergiev, Metha, Petre, Davis, Maazel, Noseda,…

As part of this policy of offering quality, this weekend, the «Choir Symphony» has been programed. The conductor chosen to lead both the Palau de les Arts’s stablished groups is the italian Riccardo Chailly, who has recently launched the complete cycle of Beethoben’s Symponys and received, by the way, very good reviews. Chailly certainly is one of the best batons in the last three decades.

One hour before the performance started, an open dialogue between the audience and both Chilly and Justo Romero (Palau de les Arts’ playwright) was arranged by the «Actividades Paralelas y Dramaturgia» department. During these what they have called «Encuentros/Encounters», the Musical Director made a very interesting reflection, using both his mother language and Spanish, about his approach to this masterpiece and the whole other group of Beethoben´s Symphonys. He meditated about his loyalty to the composer’s metronomic, his  thorough study of previous conductors annotations left through the years, and about the fact that «getting to» the 9th Symphony demands decades of reflections and maturity.

With the room full of young people, musicians and music students, all of them followed equally his fantastic musical remarks and valuations regarding the work developed by both Choir and Orchestra during these intense weeks which have gone by between two completely different universes, such as Beethoben’s and Puccini’s, stating in the end his will of this working appointment to continue developing in the close future.

With a Symphonic Hall bursting with audience, the concert started with a moment of silence, with both Choir and Orchestra all standing and reading the «Palau de les Arts workers manifesto» wich was as respetuous such as demanding, moving later on to the first move of Beethoben’s 9th Symphony. Leaded by a firm Chilly remarking the drama of the Minor Re chosen by Beethoben, there seemed to be an electrical stream moving from the conductors baton towards the musicians’s music stands which turned even more obvious during the fugado and without loosing its strenght till the very end of the move. The molto vivace of the second move developed and hipnotic rythm and ended in a «Fausto like» dance, respecting all the ritonelli written by Beethoben which are rarely fully performed nowadays. From unnoticeable Pianissimos to overwhelming crecendos the 9th went on without loosing its musicality at any moment. The simplicity, the see-trough and the ease of the different levels and most classical textures was enhanced during the third move finally breaking into the sudden Symphony’s Finale.

The Choir’s forcefulness and its determination throughout the whole Symphony without a single down, accompanied by the whole Orchestra, created a simply memorable time which, by the end of the performance, made the audience stand and be unable to stop applauding and cheering both Palau de les Arts-settled-elements.

The only part where some lack of balance was noticed was the solo quartet with the stand out of both the Australian tenor Steve Davislim and Spanish mezzo Maria José Montiel and the drop of the soprano Julia Bauer, perhaps too light for the roll and the Swedish baritono Rudolf Rosen with non existent lows and hemmed highs as the less positive fact of the performance. 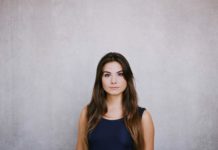 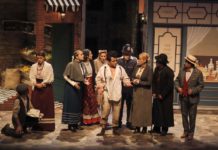 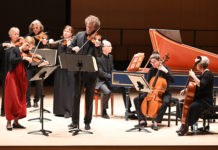