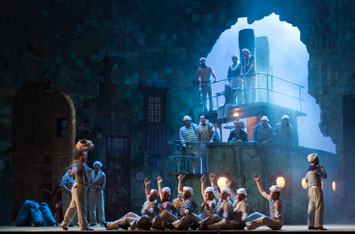 It was not easy to bring to the stage of La Maestranza Theatre an almost contemporary Seville, still in the memory of a city so proud of itself same as disgusted with so many stereotype. On the other hand, the story of a single mother who is not ashamed of being so  despite the society of his time, Seville 1950, would have lost much if it had set out of place and time. Hence the merit of the stage direction of Curro Carreres finding that just measure that, when it is exceeded falls on the topic and when it is not enough, falls in the complexity.

The scenery of Ricardo Sánchez-Cuerda gives us a vision as imaginative as stuck to the reality. It does not seek a literal reproduction, but using such a Triana like element as the tile, to draw both the neighbors yard and the view of Seville from the other river shore, hallmark of the old arrabal. Its irregularity and lack of parts in many places, remind us that it was old and humble, housing idea that is reinforced with numerous fissures which, advancing the work, will serve to allow the irruption of the boat, as forceful as the one of his captain in history.

Magnificent soprano Carmen Solís, as a singer and as an actress, as well as José Julián Frontal and Alejandro Roy, very applauded his Salve to Sevilla the first, and the Asturian tenor in the romanza «You who know of the love» deliciously framed by a postcard of the Puente de Triana. Mª José Suárez offered a Micaela who sang as well as acted and danced, especially in their numbers with Angel Garo (Angelillo), who had to overcome a vocal condition to play his character perfectly. Very good level of the rest of the cast, highlighting the lovely soprano Patricia Cayuela gown.

Beautiful interpretation of the choir of the habanera in the first Act, with choreography included as required in the score. And very solvent in the «May Cross» scene, where, in addition to singing and dancing, they have to contend with inaccuracies of the score of Sorozábal when writing «sevillanas»; an added difficulty, but nothing worrisome for a formation of the professionality and the quality of the choir of the Maestranza.

The scene of the «May Cross» that Sorozábal left written, feels short, so a success is the presence of Jesús Méndez singuing and Manuel Valencia on guitar, as well as the ballet corps who, with Antonio Perea as choreographer, gets more reminiscent of a Flamenco Party in a courtyard than a dance academy, while displaying the professionalism expected of those who get to a stage.

Impressive the soleá where, as in a mirror, two dancers representing Kings as a lover and a mother who cradles tenderly the costume tail as if it were her own son.

The Orchestra, with Juan García Rodríguez to the baton, squandered illusion in a moat stepped for the first time; Perhaps that is the reason why there was some timely volume and tempo mismatch with voices, something that never tarnish the good job of all components. 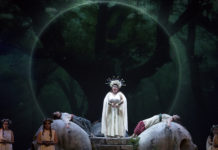 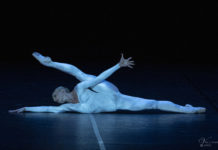 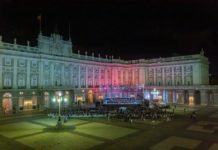