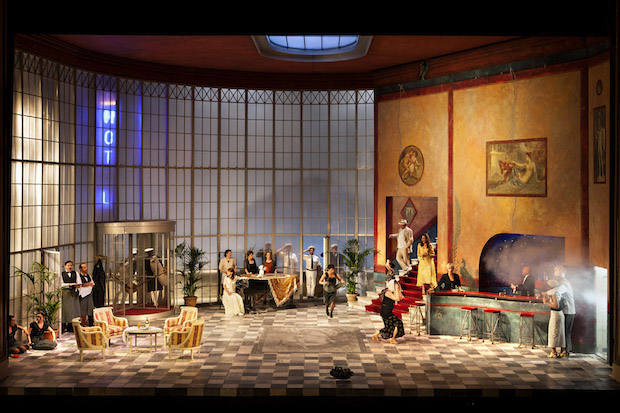 Cosi fan tutte, or as the subtitle specifies the school for loving couples, premiered nearly 225 years ago. However, we do not seem to have learned a great deal since. Even today lovers are convinced they can remain loyal and will stick together no matter what. The success of programs like ’Temptation Island’ shows us that the question, whether we can resist serious temptation in matters of love, remains on our minds even today. Unfortunately, time and again it is confirmed that human nature, in spite of all noble and honorable intentions, does not follow that logic.

Just as predictable as the plot of this opera, was the premiere of Cosi fan tutte in Antwerp. A fourth revival of a production that originally went in premiere 17 years ago. In itself, that doesn’t need be a problem. Just look at productions as La Bohème by Franco Zeffirelli from 1982, which is again on the 2015 program of the Metropolitan Opera. In spite of a lot of very nice elements and findings it seems that unfortunately, this ‘Cosi fan tutte’ has really lost its sparkle.

Timeless and still compelling are the sets of Johannes Leiacker. Not only aesthetically and functionally they are particularly clever. The fact that the second act’s setting is a mirror image of the first act’s set, betrays real insight into the score and the structure of the piece. The two acts are in fact a mirror image of each other in terms of structure. The question that stage director Guy Joosten asks himself, namely whether the second choice of the sisters Fiordiligi and Dorabella might not be the better one, is interesting. Definitely, the very choreographed staging has a lot of fun moments but unfortunately, also less successfull scenes. Examples of such moments are the clumsy performances of two male extras at the beginning of the first act and the poor, not accumulated transition towards the first chorus. More annoying even, is the chorus member shaking her hips on the beat of her MP3 player all the way through that beautiful first chorus. Anno 2014 no one needs this kind of desperate attempt to make a production «modern». Still, the real problem of the production does not lie in these details, but in a general lack of speed and energy.

However, the cast of young and talented singers obviously disposes of a proper dose of energy. The Romanian soprano Cristina Pasaroiu, as Fiordiligi, has a very beautiful and delicate voice. I do have serious questions concerning the casting of this beautiful singer in the role of Fiordiligi. Mozart was exceptionally gifted when it comes to understanding the human voice. In the arias he wrote for his protagonists, he shows us with great precision what kind of specific voice he has in mind for a particular role. The role of Fiordiligi, for example, he wrote for a soprano with a strong midrange, ditto low notes, and the ability to sing coloratura. Pasaroiu would undoubtedly be a gorgeous Susanna (Nozze di Figaro) or Pamina (The Magic Flute). As Fiordiligi, however, she does not only lack a quarter in her lower tessitura, but also body in her tone. Beautifully casted on the contrary is the Russian mezzo Maria Kataeva as Dorabella. A very warm and elegant voice, a solid technique and all that combined with a fresh and slim appearance. Last but not least among the female cast is Aylin Sezer. The young soprano is member of the ‘Young Opera ensemble Flanders’ and makes a noted debut as Despina. At times she gets a little in trouble because of the very light casted Fiordiligi, but meritoriously downsizes herself vocally. Still, physically, she remains very dominant in the women’s group. In previous productions of Opera Vlaanderen, the Turkish-Dutch singer already proved to have a voice and descent technique. In this Cosi she can now also confirm as an actress. Unfortunately the Despina she performs is not a very subtle one. Through the stage direction and the vulgar costume and footwear for Despina by Karin Seydtle, it is clear that this perception of Despina is the vision of the production team. It is a pity that the portrayal of a young woman with more common sense than her two mistresses together, often relapses into a very stereotypical and woman-unfriendly, misogynistic figure. Perhaps ‘modern productions’ should break with those obsolete trends, and portray Despina as the clever and hands-on-girl she really is. The performances of her ‘partner in crime’ Umberto Chiummo as Don Alfonso is amusing. Unlike Despina, he is portrayed as a gentleman, in a stylish white suit. Although Chiummo is definitely a good actor and a handsome appearance on stage, you can hardly call him a great singer. Throughout the whole opera, he needs to leave his vocal comfort zone only a few times, but at the premiere he manages to miss those few higher notes. Still, in the ensembles he does sound good. That cannot be said of Sébastien Droy. The young Frenchman has a beautiful and warm voice. The ease with which he sings his very difficult arias, shows a very good technique. It is bizarre that in the ensemble he sounds so weak. Maybe it has to do with the fact that he is often positioned in the very back of the stage during the ensembles. His colleague Riccardo Novaro is a very convincing Guglielmo indeed. In addition to a beautiful vocal performance Novaro is clearly a talented actor/comedian and succeeds in bringing some panache into the performance.

In the recent production of Khovanshina, the fantastic chorus of Opera Vlaanderen showed their full potential as actors. Unfortunately, in this Cosi fan tutte, there are no real challenges for the depleted chorus as far as acting is concerned. Vocally, the chorus led by Jan Schweiger, was again very convincing. Praise for the great performance and comic talent of bass /chorus member Miguel Torres in his role as bar manager.

Conducted by Umberto Benedetti Michelangeli the orchestra of Opera Flanders doesn’t always sound as convincing, bubbly and together as usual. Michelangeli’s very unclear direction technique must be indeed very difficult to follow. Besides some very elegant phrasing, he at times goes for rather bizarre tempi: often almost unrealistically fast and sometimes really slow. Theoretically, these ideas are very nice, but they are not particularly voice and singer-friendly. Beautiful performances by the woodwinds in the orchestra and by Jeanne-Minette Cillieres on the Harpsichord.