This year’s Munich Opera Festival includes two complete cycles of Wagner’s Ring of the Nibelung in the new production that began with Das Rheingold last February and was completed with the staging of Götterdämmerung a few weeks ago. Fittingly, I began my visit to Munich with the prologue to the tetralogy—and did so on a high note. Everything can be improved in this world, but the opening shot of this Wagner Ring has been exciting, indeed.  Andreas Kriegenburg’s production has the considerable merit of avoiding the temptation to resort to fanciful modern provocations. It focuses on the essentials: narrating the story, and does so very imaginatively, even if not ended up being particularly exceptional. My colleague and friend Jens Laurson wrote about this production for S&H in February (review here) and since I fully agree with his comments, I recommend to read his review.

Kent Nagano got an excellent performance from his magnificent Bavarian State Orchestra, but occasionally I found his interpretation a little bland—for example in the scenes of the Gods and at Nibelheim. I heard an improvement in the last two scenes of the opera, although Erda’s advice wasn’t exactly shrouded in mystery. One does not come to Munich to attend just a good performance, but an exceptional one, which explains my relative disappointment with Mr. Nagano’s reading while I might have been delighted by the same experience somewhere else.

Danish baritone Johan Reuter was a light Wotan, with a pleasant and well-handled voice, but some sizes too small to deal with character. I had the opportunity to see him several times in the past and it’s no surprise that Wotan doesn’t quite suit him. He is a good singer, but I want my Wotans with more heft.

Irreproachable in every way was the Alberich of Wolfgang Koch. He has a well suited voice to the evil Alberich (as he does also with Telramund, as I reviewed in Munich a couple of years ago by Laurson (S&H 8.7.2009) and myself (S&H 25.7.2010). When you need an Alberich, his is the first you should call!

The other major performer of the evening was Slovak tenor Stefan Margita, who made a magnificent performance in the part of Loge. He was an outstanding interpreter from beginning to end. Loge does not need to be a heldentenor and Margita was ideally suited to the character he portrayed. Sophie Koch was correct in the part of Fricka, but not truly outstanding. She is a light for the character to begin with, and she was not her best on stage that night.

The Giants seemed too light, at least compared to my expectations. Thorsten Grümbel was a baritonal Fasolt, and Phillip Ens never a menacing Fafner, and  rather tight at the upper notes. Catherine Wyn-Rogers was a minor Erda, lacking weight at the bottom of the range. I liked Levente Molnar as Donner, as well as Thomas Blondelle as Froh, rather light, but singing with gusto. Ulrich Ress was a good Mime and Aga Mikolaj played her Freia with routine. Kudos to the Rhine Daughters Eri Nakamura (Woglinde), the excellent Angela Brower (Wellgunde), and Okka von der Okka Damerau (Flosshilde), who is in possession of a very promising voice. 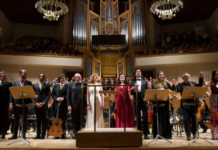 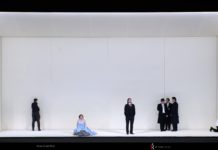 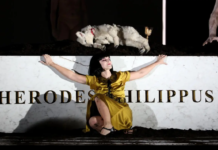