Great excitement in Vienna to see the Peruvian tenor Juan Diego Flórez in his last performance before being appointed KS Kammersänger by the Vienna State Opera. We suspected that Florez had a surprise for the Viennese audience that is why we went that night to the Home of the Ring with great enthusiasm and expectations knowing moreover that the Peruvian tenor is in full shape as demonstrated with its recent success in the Opera de la Bastille in Paris when, for the first time in the history of the theatre, he performed an encore of the famous aria «A mes amis» from Donizetti’s «The daughter of the regiment».

-Belcore; the young baritone Hungarian Levente Molnar that debuted in that role in Vienna. Does not have a great voice but liked much in the comic facet. Discreet in the aria of greeting «Come paride vezzoso», was improving along the representation being its best moment the duo with Nemorino in the second Act.

-Dulcamara; the young Czech bass Adam Plachetka which has a great presence, know how to act and possesses musicality even though his voice is not yet big enough to make today a great Dulcamara. We had the recent reference of great voices as Ambrogio Maestri or Erwin Schrott and in my opinion the Czech bass is not at the height of such a vocally demanding role. Not bad sang the beginning aria but not transmitted at any moment of his performance. It will be interesting to see him again in other roles.

-Adina; the Spanish soprano Silvia Schwartz to whom this roll comes as ring to the finger. She is a singer of considerable beauty that follows a great aura and has a nice voice. She is such an elegant artist on stage… we could say that the glamour of the past has returned with her to the opera. She was liked in «Della crudele isotta» and in the rest of interventions of the first Act, which were highly praised by the public. Very secure in the treble, she was influenced of euphoria and the great atmosphere breathed in the Theatre after the repetition of «the furtive lacrima» and took her best to embroider the last act where he was really good in the aria and the final Duet with Nemorino. She makes a great artistic partnership with Juan Diego Flórez and it is showed the great chemistry both emerge on stage.

-Nemorino; the Peruvian tenor Juan Diego Flórez that provided the exciting night time to give an encore. I’m depleted of accolades and adjectives for this great tenor: the best light tenor of recent years, the best history Rossini tenor, the coloratura king… with an incredible and infallible technique in the high notes… it is incredible what he can do with the voice.

He was brilliant in the aria of home «Quanto e bella» and in all its interventions in the first act in the comic as well as the vocal part. In the second Act was able to bring opera Donizetti to its terrain magnificently thrilling in the duo with Belcore «Ai perigli della guerra…» where gift a chest Do that enthusiasm the public and that was a brilliant prologue of what then it was going to happen.

And finally came the great moment we all expected: to the beat of the harp began to sound the first chords of the romanza «Una furtiva lacrima»… was palpable the restlessness, excitement, the excitement and nervousness of a public of Vienna that reminded me to the famous murmur of the “Las Ventas” bull ring murmur when a bullfighter is going to start its work with the “muleta” before a good bull that has seen the public and that can promote a great “faena”.

That way of singing! Great technique and what a beautiful voice… touching perfection in the “belcanto” with some incredible coloratura and originality in the end that we had never before heard where the great Peruvian tenor invention one last Cadence with included chest Do that will remain forever in the memory of those who attended such historical function. The aria ended and we could not believe that Florez had done with the voice, something wonderful, spectacular “belcanto”…(even Donizetti would have been proud). The Viennese public explodes in bravos and applause coming to live one of the most exciting moments in years at the Vienna State Opera… and at the third minute of applause and intense cheers, Florez repeated. Chords of the harp back to sonar and Flórez encores «the furtive lacrima» playing again masterfully with such prodigious Cadence bound with a di minuend implausible after a chest Do If possible even more intense; and a final one stroke of pure art and exquisite technique with one last note that culminated the aria and lasted an eternity. Thank goodness that Florez repeated the “romanza” as if not having done, all we had thought that it had been a dream…

We had seen several times to his Rossini-Majesty, tenor Juan Diego Flórez, as Nemorino in the ‘Elisir D’Amore’, but these variations of Donizetti (it seems that the composer from Bergamo wrote them in his days) were never sung before in a large theatre and it was that, what frame the difference and contributed to make the function a unforgettable event. If Gaetano Donizetti get in his days to write such variations is unimportant, since last night who rewrote the opera «Elisir D’amore» was Juan Diego Flórez.

We should stress in addition to the technical quality great delivery and generosity of Florez, that he saved strength to culminate a great finish extending the last “Si Bemol” and delaying a few seconds the fall of the curtain, something for which the more old men of the place reminded the great Bonisolli, that used to continue singing with the already lowered curtain.

Ultimately with those incredible coloratura and its brilliant treble and over trebles, Florez came to «Rossini-make» the Donizetti Opera leading its terrain masterfully as earlier indicated, something incredible and we believe is his greatest contribution to the history of the lyric. That is why he is considered the best male Rossini interpreter of recent times…

– Musical Conductor; the young Guillermo García Calvo from Madrid! What a great Conductor! A specialist in the conduction of singers, it shows that his years of work as a master of repertoires at the State Opera Vienna, the best school in the world, have helped him and granted a unique base, which allows him to conduct opera as opera and not as other conductors  who insist on conducting  opera as if it were a Symphony. He directs from memory and hardly checking the score to be always aware of the chorus and singers who he understands and coordinates as a teacher who has more than 40-year career. Hi might search his personal showcasing rising volume of the Orchestra in certain passages but however he waives for the benefit of the singers, which greatly facilitates their work, affecting the final result. We can point out that with Garcia Calvo singers have a «Conductor à la carte» with which are comfortable, since it is going to adapt to their vocal needs and which whom they will always identify with. It is not surprising that it is the favourite director of the Ballet of the State Opera of Vienna since with dancers (who coordinates masterfully waiting for them when he has to do it and nailing the tempos) performs the same work.

Thanks KS Kammersänger Juan Diego Flórez by his wonderful voice and by giving us a historical encore and one of the most exciting moments of the recent years. What a way of thanking the title of Camera Singer to the Austrian public!

And thanks to the Manager Dominique Meyer to respond to the wishes of the public and allow the encore in «the furtive lacrima», something that never would have been possible with the previous inflexible and authoritarian Manager to which the public was important to. This was the difference between a great opera night and a historic and unforgettable night for the ones we had the privilege of attending. Mercy monsieur Meyer!

9At the end we left home with the pride and self-esteem through the air, since last night at the Vienna Opera Spanish was spoken. 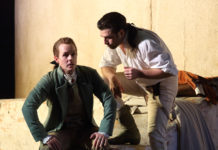 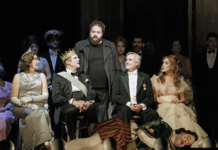