After A few weeks of dreams with the»L’Elisir»of Florez and the»Boheme» of Beczała, there was great excitement in Vienna to listening again to the Canarian tenor, Celso Albelo, in his debut as Elvino in «La Sonnambula» by Bellini. In the memory of the Viennese public remembrance the great Nemorino Albelo had given in his debut at the Staatsoper last September. And the truth is that th tinerfeño tenor brightened to the highest level.

-Lisa; The soprano Ileana Tonca, one of the best female voices in the Ensemble of the State Opera in Vienna, I liked her a lot in this role.
As actress was splendid and very convincing serving thread of action all night. Vocally she was very good in the aria’s home and was widely applauded by the public in their interventions in the second Act. In addition to possessing a beautiful voice ideal for the belcanto Repertoire She has musicality and great security in the high notes. A luxury that the Opera can have her for second roles.

-Count Rodolfo; the Italian baritone Michele Pertusi is the elegance for excellence on stage. It has a great phrasing and the recitative was at a very high level throughout the night. He served in the aria from the first act and proved to be an artist of a great personality and with many tables on the stage artist. We notice that he has sung with the largest and has been conducted by the best conductors. He is a singer who acts, moves and sings with so much elegance… from there that the role of the count comes to him as ring to the finger.

-Amina; the young American soprano Sarah Coburn who was superb all night showing that he has a great voice ideal for this type of soprano coloratura roles. We had as reference to an excellent Stefania Bonfadelli in 2003 and the great Anna Netrebko in 2006 that she had set the level very high, but however, the American was in the level showing that she has a great voice and a very fluid coloratura technique as required by the character of Amina. She highlight in the arias «Come per me sereno» and «Ah non credea mirarti» very applauded by the audience and provided a dramatic finish when sheathed in an elegant red dress (great success of the excellent Marco Arturo Marelli stage director) embroidered the cabaletta «Ah non giunge». Her youth and beauty joined to her great qualities predict a great future to the Soprano. We will have to follow her from now onwards and attend functions where her name appears on posters since it is a guarantee.

-Elvino; the young Canary tenor, Celso Albelo, that debuted in the series as Elvino in the Vienna Opera was sublime. Possesses a voice so big, powerful and beautiful at the same time (qualities that few tenors meet today) that it is no wonder that it has won this year the lyric «Oscar» because there is not an equal voice in the international operatic scene for the belcanto. It improves day by day on the stage and if still choosing, as until now, suitable for her voice roles and age will be one of the world references in the coming years. Without any doubt is currently the best tenor of the world though it is so few years career, but for the big fans that we have had the privilege of listening to him ever, this tenor (that is every day more reminiscent of master Alfredo Kraus) can get to sing roles which will be for the history of the Opera. He was vocally impressive in all its interventions in the first Act, with incredible acute and overacute even to give a E flat at the end of the duo «Are the wandering zefiro geloso» left impressed the public Viennese. In the second act he made a genuine vocal display showing a great technique and pulling out the power of his very great voice that reached every corner of the theater at all times with an intensity rarely seen before. He starred in the high notes of all interventions reaching thrill in the aria ‘Tutto e sciolto’ and famous cabaletta «Ah! «perche non posso hate you» that came up too high (C, D) and lengthened the end an eternity. Undoubtedly was a complete performance of the tenor Celso Albelo (the best Elvino I’ve heard in my entire life) that had the bullfighter gesture to give a flat E to the Viennese public.

-Musical conductor; the Italian maestro Evelino Pido delivered completely from beginning to end something very rare in Conductors consolidated career veterans when they direct opera. He was concentrated in the choir and singers all the time singing with them throughout the opera (when he conducts no pointer is needed) and giving a lesson in how to control all the elements of the scene. I really liked his Latin way of directing and is a visual pleasure to contemplate him in the passages more musicals where he shines with the Orchestra. It is impossible to get bored with the Italian master and will be very interesting to see him again in Vienna in works of Verdi or Puccini.

-Stage director; excellent idea of Marco Arturo Marelli, one of the great designers of this century, with a particularly bright moment in the final cabaletta when soprano leaves coaxed with a red dress that always arouses the acclaim and even the applause of the public.

After 3 weeks of dream which can only offer the Vienna State Opera with the best possible cast of tenors worldwide: Shicoff, Florez, Beczała and Albelo (only missed Jonas Kaufmann to complete the luxury repoker) bid farewell to a great opera year 2012 in the best possible way, with a great «Sonambula» where the protagonist couple flashed to high level. 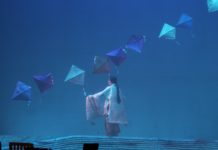 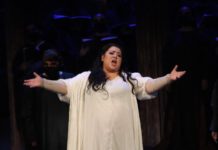