Is a pitty – not to say a shame – a remarkable musical version of this masterpiece of Richard Wagner, accompanied in addition to a good vocal performance is overshadowed by a stage production incomprehensible and free, that does not but bring out the concept of eurotrash, with which the Americans have named all these scenic excesses so common in European countries.
This production of the British Graham Vick premiered here a couple of years ago now and was received with a rain of boos, which have certainly been a sublime pleasure for him.

There are productions of many types, which can basically be reduced to two: good and bad. The one that concerns us is almost in a third category.

Today we are used to the stage director takes huge degrees of freedom, which seems to me perfectly adequate, since their work is none other than telling the story from his own point of view and with the intention – often commendable – to make the plot more understandable to this days public.

What a stage manager should keep in mind is that there are two untouchable elements in an opera, which are the libretto and the music, to which his work must serve. When a stage director does not place himself at the service of the opera, he is assuming a protagonist role who is not. And this is exactly what happens in recent times with the British Graham Vick, who with so many tributes and praise by the so-called avant-garde critics, due to become convinced that the real genius is not Wagner but he.

Graham Vick is based on a set of Paul Brown, which is unique throughout the three acts, offering a large room divided by a wall, with a large window in the Center and rooms at the sides. In each of the acts does not change but the layout of the partition wall, or better say the angle that we are offered with. In the part next to the Viewer, we have a large room in three acts, with furniture from Ikea and the permanent presence of a coffin.
In the part which we can call outside wandering characters that have nothing to do with the opera, at least for this who writes. The costume is due to Paul Brown himself and is brought to present times, although head not be broken to design «no costumes» for some extras.

There are scenic productions that make one think, but what we want is thinking at the end of the representation, because, if what is offered on the scene, is incomprehensible, the evident risk is the Viewer to deflect its attention from the music, and thats the worst thing a stage director can do.

Assuming that Graham Vick did a production full of symbols, one wonders what that means and does not find answers. An authentic Treaty of regista somewhere would be needed to guess his ideas. Is a stage director who is not understood really smart? I may be a genius, but his intelligence leaves much to be desired.

Graham Vick in the first act has no better idea have always on scene to Tristan, althugh he does not sing until the end, and also to King Marke, seated in an armchair, which will rise in the last bars to greet the Princess of Ireland.

What does it mean a young naked woman wandering around the room? why is there a coffin always onstage? What is the meaning of a child making paper boats, who the naked woman leads outside the stage? What has a young woman wearing the veil and carrying a suitcase, which hides behind the sofa of Tristan to do with? Who is the widow in black which places flowers on the coffin? What brings to the story that the main couple inject heroin into vein rather than drink the love potion?

What in the second act a naked and well-armed joung man digging a grave? And the naked young woman who walks on stage to sit in an armchair and watch lovers to later retire?  And the same young and with the same outfit, but supported by the hinge of the room, during the last half hour of the second act? Is a finding that Tristan is held in the last act in a kind of nursing home, with obvious signs of Alzheimer disease? And that Tristan will not die in the arms of Isolde, but that simply leaves to the point of singing his last sentence, not in the arms of Isolde but in internal?

Would what profound idea is behind that seemingly Isolde do not reach Kareol, but that also seems to live in the asylum? I have always believed that Isolde dies of love over the body of her beloved. Not here. Simply, Isolde leaves, although I can not exclude that those who accompany her are not others but «La Santa Compaña». It should not be forgotten that Graham Vick was the subject of a tribute in La Coruña, which I attended, and someone must have told him of Galician legends.

It is fine with me a stage director makes the Viewer think, but, please, once he representation is over. But if in addition to thinking, one does not understand anything, all that is achieved is distracción from the music. For that I prefer thousand times a concert version, which also has a smaller price.

Returned to the podium at the Deutsche Oper conductor, Donald Runnicles, and it has been a happy return. His reading of the opera has been magnificent, taking a great advantage to the excellent Orchestra of the Deutscheoper, which significantly improved its performance in Meistersinger. Since the prelude noticed that things would be different and so it was. It has been a delicate and passionate direction that invited us to close our eyes to the cluster of incongruities and nonsense that were on the stage.

No more comments to his performance apart from the fact to have exceeded a bit in sound in the last act, when Tristan was already at the limit of its possibilities and not as a result of the alzhaimer disease. A magnificent performance by Donald Runnicles.

There have been not many tenors capable of facing the part of tristan and today is no exception to the rule. The American Stephen Gould is a powerful tenor. with an tractive voice and who is here at the limit of its possibilities. His inhuman third act monologue almost beat him. Before a tenor who is able to overcome such a terrible test no choice but that show admiration, althought the excitement did not exist.

Violeta Urmana was an Isolde somewhat irregular, but much more convincing here than in her forays into the Italian Repertory. The first thing I have to say is that her stage performance was much more convincing than others, especially, its unfortunate Tosca in Bilbao. The voice does not change, working here better than in the Repertoire before indicated, but her high notes are excessively metal and in the second Act uses the cry. For me, the most convincing vocal delivery was the Liebestod, one of the few exciting moments lived on the stage.

Samuel Youn was a Kurwenal’s voice attractive and young, perfectly reaching into the Auditorium. Made a good character, although his tone is excessively light for me. The British mezzo-soprano Jane Irwin was a proper Brangaene, always musical, although she is somewhat short amplitude and somewhat tight at the top. The low British Peter Rose was a good interpreter of King Marke, wide and well ring voice, somewhat short of excitement.

The Deustsche Oper presented an entry that dif not reach 90% of the capacity. The public was very warm with artists, receiving the largest ovations Donald Runnicles and the two protagonists.

Representation began promptly and had a total time of 4 hours and 47 minutes, including two intermissions. The strictly musical duration was 3 hours and 37 minutes. The intense final applause lasted for 9 minutes. Graham Vick was not in the theater, what many of us regret.

The price of the most expensive seat was 88 euros, having an auditorium seating from 50 euros. The cheapest aeat cost 30 euros. 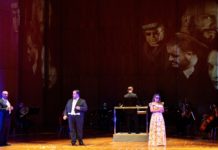 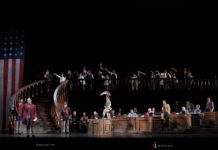 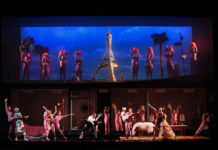