Fantastic, intelligent and imaginative are at least three of the adjectives that could be applied to this new version of W.A. Mozart’s Don Giovanni that we have been able to enjoy the last 29 June in the Auditorium of Roquetas de Mar in Almeria. A production conceived and carried out by the stage director Curro Carreres, which was set in the rural Spain of the 1930s and that perfectly reflected the difference in social classes which already includes the original Libretto by the Abbé Da Ponte, but transferred to that so special and particular time which was the violent Spain of the Republic. The transformation of noble characters of the original 18th century into rural and caciques lords of the 1930s and of the characters belonging to the lower classes into peasants does not mean that the plotline suffers any strange strange mutation and does not affect its understanding at all. Further more, the don-giovanni’s tragedy is framed in a context that we all know very well. The use of resources such as the dances of farmers at the scene of the wedding of Masetto and Zerlina, the Carnival at the end of the first act and the band, in that wonderful scene from the end of the second Act reflects an absolute knowledge of the storyline mixed with the temporary conversion of the theatrical fact. The economy of means in the scenery was supported by the intelligent use of the audiovisual media which projected at the back of the stage, in the way of oneiric dreams, memories of Surrealism prevailing at the time and represented, among others by Luis Buñuel. This staging was absolutely culminated by the extraordinary contribution of the famous master of lighting Eduardo Bravo who contributed a few games of lights that framed and stressed the plot and performing lines of work. The costumes of Pelayo Rocal was also perfectly suited to the scenic idea that was expressed on the stage. And all this scenic machinery could not have come to fruition without the excellent and invisible work of governing and inner master Oscar Lobete.

As for the musical aspect, Maestro Emilio Fenoy knew how to arrange rightly FIMA Orchestra (Indaliana Foundation for music and the Arts) and members of the choirs Choir BRADL, Choir Emilio Carrión, Coral Sun and Sea in Roquetas de Mar and singing students of the Conservatory of Almeria which were the members of the choir of the opera, in this difficult work. We must congratulate the Maestro Fenoy on the result obtained in the whole of the work. Only to be mentioned some sound imbalance in the metals section, but that did not affect the final result. Also Javier Artigas demonstrated his knowledge in the difficult art of the accompaniment of the recitatives.
In what refers to the vocal actors, we could enjoy a luxury Don Giovanni the Madrid baritone José Julián Frontal who made an extraordinary recreation of the Mozart character. His voice fresh, powerful, colorful, dark and nuanced allowed us to feel this great seducer features: a strong character, believed of himself, thuggish, arrogant and brave, sometimes cynical, sometimes funny, but always aristocracy-lord.
At his side was a cast of singers all of them Andalusian given him a proper reply. Ricardo Llamas as Leporello made a very successful creation of the character, emphasizing the duality of the character, and showing us some very interesting actor skills given the buffo character, complying with the difficulty of the character. Donna Anna was played by the Almerian María Jesús García who perfectly resolved the enormous difficulties posed by her role, both from the technical point of view and the interpretive. Cristina Bayón made a beautiful creation of Donna Elvira, sometimes nearest the nature of madness than to the spite and offering beautiful pages, both in the Quartet in the first Act, as in the Sextet led by the second in which highlighted her line of singing with her interpretation. The also Almerian Juan de Dios Mateos offered us a more than correct Don Ottavio, although perhaps a bit cold from an interpretive point of view. Laura Sabatel as Zerlina and Pablo Gálvez as Masetto fulfilled their roles perfectly. Two young singers who will have to be closely followed and see the evolution of their beautiful voices. More than fulfilled was Carlos Garcia-Ruiz in the short and intense role of the Commendatore. I cannot or should not end this chronic without a very special mention to Pablo Mazuecos, Coordinator, producer, factotum of this production, conducted by his stubbornness. Holy madness that has allowed to Roquetas de Mar and Almeria enjoy an international like Don Giovanni. My most sincere respects. A production worthy of being repeated dew to its intelligence, imagination and good taste, highly recommended. A first class Don Giovanni. Congratulations Master Carreres, congratulations Master Fenoy, congratulations Paul Mazuecos. 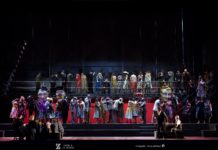 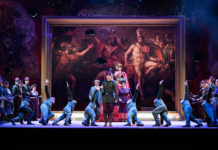 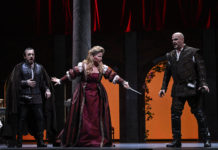