BILBAO
On the 18th August, faithful to his annual appointment with the Euskalduna Palace, the zarzuela returned again to Bilbao within the Aste Nagusia. In this case the chosen title was «El Huesped del Sevillano», by Jacinto Guerrero, libretto by Luca de Tena and Enrique Reoyo, premiered in 1926 at the Apolo Theater in Madrid. Given the size of the enclosure of the Euskalduna, it is necessary to amplify the zarzuela spoken part, not the singing one.
The Soprano Maria Ruiz (Raquel) wore a uniform, wide and powerful voice. A fleshy Center, showing extent register, showing outright bass and a well placed and projected enameled Trebles. Ruiz, offered a delicate game of nuances in the romanza «When the bass sound of the bell……».

With it it filled perfectly, as well as in the «Insolente, presumido…» duo, or the replica of the aforementioned romance of the soprano, the tenor Sergio Escobar (Juan Luis). Escobar, in constant grew, owns a beautiful timbre, rich in overtones and harmonics, and one careful broadcast, another young voice to follow that resolved the famous and well known «Canto a la Espada».  Well, fulfilled in the role of the villain (Don Diego), Axier Sánchez from Irun.The brevity of the role, despite the inclusion in the second act of «Satan, Rey del Averno» romanza from the zarzuela «Las Hilanderas», did not show the full potential of this baritone.
If sometimes in the zarzuela the comic part is too excessive or histrionic by their interpreters, in this case was the opposite. Nice, palatable, and effectively solving their part were in tenor Charles Crooke (Rodrigo) and the comic tiple Aurora Frias (Constancica).  A veteran of stage Henry R. del Portal, interpreted Cervantes.
Great work of conductor Tuglio Gagliardo leading the Bilbao Liric Orchestra, the Tempus Ensemble choir, as in the famous Lagarteranas and the Ballet of Cristina Guadaño. The stage direction was by A. Ramallo, who combined well resolved scenic moments with others somewhat confusing  in terms of the characters and chorus going in and out the stage. All an all, a great Zarzuela night. 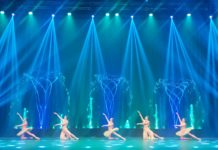 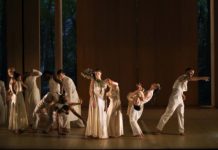 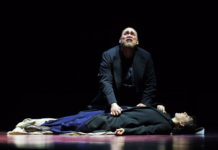