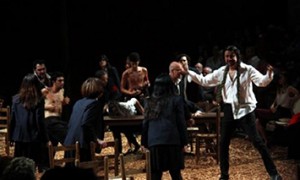 The forbiddance to love, also known as the Novice of Palermo, is the first opera that Richard Wagner got to premiere,  although it is not the first he composed, since Die Feen (the fairies) never came to be premiered in the composer’s life. The premiere of the opera which is held in Magdeburg in 1836 and was a resounding failure to the extent that was withdrawn from the cartel after the premiere. Few have been the occasions in which has been represented after and between them would have to point out the most successful of them all, which was directed by Wolfgang Sawallisch in Munich in 1983 on the occasion of the celebration of the 100th anniversary of the composer’s death. It seems that the 200th anniversary of the birth of Richard Wagner has made more than one theatre to look to these operas of youth. If a month ago are represented, although in the form of concert, at the Palace of sports of Bayreuth, now the Perelada Festival has taken decision to offer it in what represents the absolute premiere of the opera in Spain.

Das Liebesverbot is a comic opera, which follows the tradition of the French and Italian opera from his time, though suddenly appear reasons pointing to the Wagner’s maturity. Any fan is able to identify some passages that remind even to Tristan and Tannhäuser. Without wishing to go into comparisons with the great Wagnerian work of maturity, it’s a nice, well-made, opera which does not deserve to have fallen in absolute oblivion. For me its greatest problem, as in so many other operas of Wagner, is in the libretto, written as usual by the composer himself. The original opera has more than 4 hours of music. Sawallisch and Ponnelle, on the occasion pointed before in Munich, took the good decision to make cuts and let its duration reduced to 2 hours and 35 minutes. The one that has been offered in Perelada, which I will refer below, has included new additional cuts, which have left it below 2 hours of duration. Lost music and gains in agility.

Thus the version offered by the festival of Perelada is a trimmed down version of the opera and not only for its duration, but also for the orchestration, having been offered the reduced for Chamber Orchestra Frank Böhme made for the performances of the Festival of young artists in Bayreuth in 2005. Here the Orchestra has not gone 12 components, which is quite adequate for the small space were the representation has been developed, which was the Church of Carmen in the castle of Perelada, using the ship as a scenic area, placing tiers at the sides, with the Orchestra on the side of the altar. Space, as it can easily be inferred is very small, which makes very hard that this orchestral version and the vocal delivery can be transferred to other theaters. The stage show is due to Georgios Kapoglou and that responds more to a version semi-staged than to an actual performance. There is no scenery, but a space in which soloists and extras, move is little else than a few chairs and a table… The costume responds to 1970s and Peter Sommerer, author also of a simple lighting. What stands out most is the stage direction, as the entire group of young singers, singers and extras give a great life to the show. The opera was in German with dialogues in Catalan.

The musical conduction has been in charge of the Italian Fausto Nardi at the forefront of the Ensemble Orquestra of Cadaqués. Both the director and Orchestra meet its mission, although the sound was not particularly bright. However, I must say that among directions musical and scenic get that opera does not lose interest in no time. The Chamber Chor of the Palau of Cathalan Music well fulfills its mission, at the same time providing their voices for all the secondary characters of the opera.

The voice cast was made up of young singers for the most part, which are very suitable for the reduced features of this scenic area, although they could hardly move to a large theatre, voices, with exceptions, were small form factor, thet had little importance in this case. To highlight the delivery of all singers to their respective roles.

The Catalan soprano Julia Farres-Llongueras was a remarkable – the novice of Palermo – Isabella, who showed a voice attractive, although reduced, and with a good dose of expressiveness. The most important voice of the cast was the baritone Alex Sanmartí on the character of Friedrich. This singer has no problems to be heard in a large theatre, as already has shown previously in the Liceu and the Euskalduna. He should try to pick up his instrument on more than one occasion and offer more nuanced and middle voices, because that way he sings can be monotonous.

The other women in the cast did well. Rocío Martínez was a brash Dorella, singing and acting in an outstanding manner. The Argentine soprano Mercedes Gancedo sang warmly the aria of Marianna in the second act of the opera.

David Alegret did well in the part of Luzio, his low voice of tenor, well managed, in the usual way. Another tenor was Vicenç Esteve Madrid, which had to dance with the ugliest, since the part of Claudio is bristling of difficulties, which he ruled as he could. Enric Martinez-Castignani was good in the part of Brighella, the head of the Police.

The Church of Carmen has a capacity of about 350 people, which was covered by 90%, approximately. The public was satisfied with the representation and applauded loudly to all the artists.

Representation began 8 minutes late and lasted for 1 hour and 49 minutes, without intermediates. The final applause lasted for 6 minutes.The ticket fixed price was 65 euros.