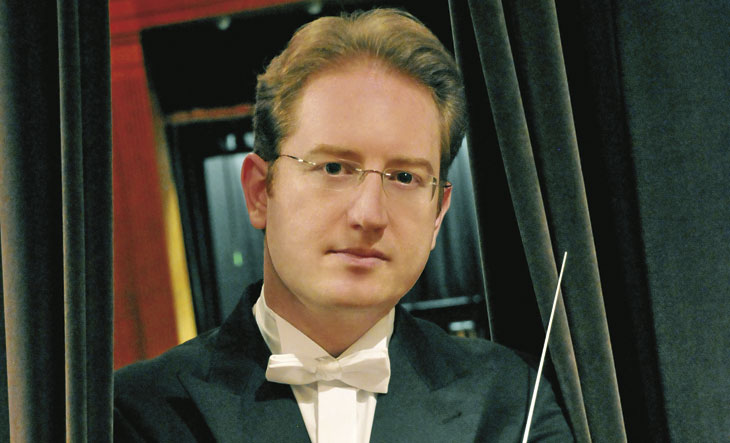 Spanish conductor Ramon Tebar was named Artistic Director of Opera Naples today. In his new post, which is effective immediately, Tebar will guide the organization’s programming and provide artistic vision and oversee the musical integrity of the company. He debuts in his new role this coming 2014-2015 season in Opera Naples’s new home, the David and Cecil Wang Opera Center.

Already well-known in the Southern Florida classical music scene, Tebar is considered a rising star in the opera and symphonic worlds. Now 35, Tebar became the first Spanish conductor to head a major American opera company in 2011, when at the age of 32, when he was appointed Music Director of Florida Grand Opera (FGO). A popular and energetic conductor praised for his musical versatility, compelling interpretations and orchestra building skills, Tebar has diverse experience in both symphonic and operatic repertoire and a growing international reputation in both the opera and orchestral arenas. In addition to the responsibilities of his new post, Maestro Tebar will maintain an international schedule of guest conducting and leading productions with FGO, as well as with the Palm Beach Symphony, with whom he has been Music Director since 2010, and with the Dominican Republic’s biannual Santo Domingo Festival, to which he was appointed Music Director this past January 2014.

«I am very honored to be appointed Artistic Director of Opera Naples, a company that has grown non-stop since its founding, which is a real achievement in today’s opera world,» stated Maestro Tebar. «I am looking forward to a very productive and creative relationship, and to making music for such an exciting community.»

Born in Valencia, Spain, Ramon Tebar began working as a pianist and Assistant Conductor in his home town at the age of fifteen. Later he started to conduct his first symphonic concerts (and made his operatic debut soon after with Don Pasquale). He was Assistant Conductor with the Youth National Orchestra of Spain (Joven Orquesta Nacional de Espana, JONDE), and in the meantime, he graduated with honors from Valencia’s Conservatorio Superior de Musica Joaquin Rodrigo. Since his arrival in the US in 2005, Ramon Tebar has been part of the musical staff of Palm Beach Opera and Cincinnati Opera, working in around 40 opera productions, while maintaining a full schedule in Europe. Maestro Tebar has been honored twice with the Henry C. Clark Conductor of the Year Award by Florida Grand Opera (2010, 2013). He was recently honored by Marca Espana as being among the most successful international Spanish talents with the «100 espanoles» Award, and featured  by the Miami Herald as «Top 20 under 40», and by the Spanish journal ABC among «Ten International Spanish Conductors».

Opera Naples
Celebrating its tenth anniversary in 2014-15, Opera Naples has produced some of the most beloved operas and earned significant praise from both critics and patrons since its inception. Cosi Fan Tutte was called a «blowout performance.» La Boheme’s staging was «electrifying,» with an «irresistable Mimi, a robust performance with largely local talent.» Carmen played to sold out houses in 2011, and the 2012 production of Faust received this praise from local arts reporter Harriet Heithaus: «Opera Naples stoked Charles Gounod’s opera with everything it had Friday to produce engaging drama, gorgeous music and light-fueled settings that put the audience in every scene.»

Along with grand opera performances, Opera Naples has presented a Stars under the Stars concert and Gilbert and Sullivan operettas in Cambier Park. Concert presentations have featured major artists such as Anthony Kearns and Patricia Racette. They have produced major choral works, such as Verdi’s Requiem in local churches.

Community outreach, one of the founding principles, introduces opera to new audiences across the region. Each year Opera Naples holds a summer camp for young artists aged 10-22 who work on sets and costumes, and perform in operettas such as The Mikado and The Pirates of Penzance. There is a Young Artists and Student Apprentice program that allows for more focused development of emerging talent.  Opera Naples regularly produces a family opera, for public performance as well as presentation in local schools. To further promote cultural arts in Southwest Florida, Opera Naples has collaborated with other arts organizations, including TheatreZone, the music department at Florida Gulf Coast University, and the ArtsNaples World Festival.

Opera Naples recently announced that it is the recipient of a 2014 $500,000 grant from the Florida Department of Cultural Affairs for completion of its new home, the David and Cecil Wang Opera Center. The center will open with the 2014-2015 season.

Details of Opera Naples’s 2014-2015 season will be released in several weeks.

SSO tributes Shakespeare in a concert dedicated to the night featuring...