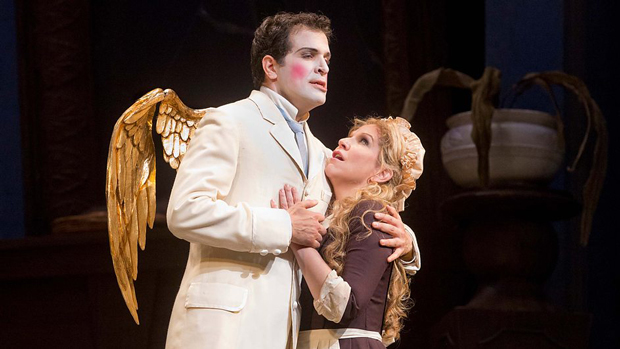 There was magic in the theater as the audience awaited the downbeat of the Metropolitan Opera’s production of La Cenerentola. The masses know it as a retelling of the classic fairy tale, Cinderella and while the fable’s ending is the same, there are a few twists and turns along the way. Rossini’s charming opera is full of laughs but intertwined in the sweeping bel canto passages and witty orchestration is the lesson that unwavering goodness is rewarded in the end.

Fabio Luisi conducted the cohesive and responsive Metropolitan Opera Orchestra. Though it was his first time leading this score, he took the podium with a calm resolve. It was obvious that the players felt comfortable in his hands and that sentiment would be shared by veteran performers on the stage as well. He approached this score with the sensitivity and flexibility necessary in the bel canto style and the production flourished because of it. 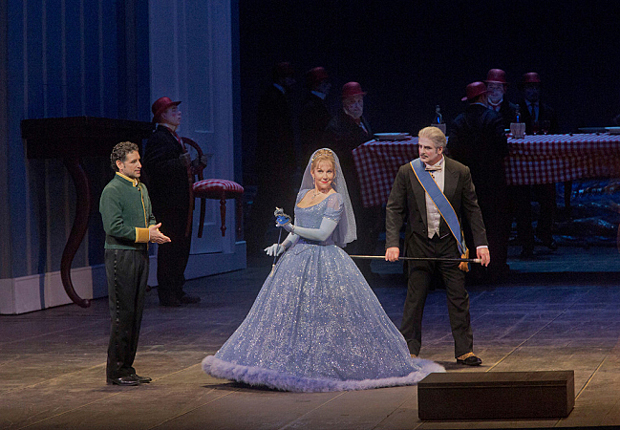 The first voices we heard were those of the two spoiled stepsisters played by Rachelle Durkin and Patricia Risley. They were ever believable as sisters and prudently tiptoed the fine line of successfully portraying a character role without sacrificing vocal quality. Don Magnifico, their greedy, self-serving father, was played by Alessandro Corbelli. Though very funny, Corbelli played his role so well that we had trouble forgiving him for his mistreatment of Cenerentola. Part of me almost wished his character went up in flames with the umbrella during the storm in Act II!

Pietro Spagnoli and Luca Pisaroni were positively brilliant in their roles. They sang Dandini, Don Ramiro’s valet, and Alidoro, an angel in several guises, respectively. Mr. Spagnoli’s Dandini was as impeccable a performance as I have ever seen in live theater. His entrance in Act I, posing as the prince, was both comical and immaculately sung. His precision in the second act sextet was notably impressive as well. The inspiration for his characterization seemed to come from a delightful place and he possessed a natural chemistry with his colleagues. Mr. Pisaroni had a distinct presence whenever he took the stage. He sang with great beauty and even when dressed as a beggar in Act I, the ethereal quality in his voice was unmistakeable and felt most at home within the walls of the Metropolitan Opera. Audience members sat up in their seats as if to ask “who is that?!” Of course, it was Luca. He must also be commended on his command of the language. Yes, he is an Italian, which may give him an advantage, but even in song, the text was clear and intelligible. 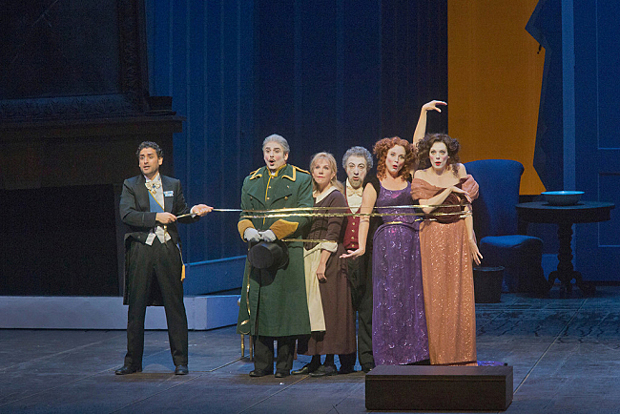 Juan Diego Flórez was a very pleasant surprise as Don Ramiro. Seeing this superstar occupy the role of a lowly, humble valet so convincingly was refreshing. As accomplished and experienced as he is, there still exists in his voice a natural innocence that made him believable as young prince charming relentlessly pursuing his true love. Mr. Florez’s high notes were all in place and equally dazzling throughout his performance. The audience was particularly appreciative of his vocal acrobatics after the aria Si ritrovarla io giuro in which he pledges to find the mysterious woman from the ball and make her his wife.

And what does one say about the stunning American mezzo-soprano Joyce DiDonato? She was the heart and soul of this production as Angelina, the name given to Cenerentola by librettist Jacopo Ferretti. Time stood still as we held our breath waiting for her first “una volta…” Before she even began to phonate, she had us wrapped around her meek little fingers as she polished her stepsisters’ shoes. Musically, every phrase had intention and direction complete with a smooth Italianate legato that is so difficult to find even among the most experienced singers. Her presence was not commanding at all. Instead, she plainly asked the audience to listen to her story and we were more than happy to oblige. Ms. DiDonato’s effortless navigation of these virtuosic passages was enhanced by the honesty and simplicity of her acting. Joyce DiDonato gave us all a lesson in what it means to truly inhabit a role with the utmost grace and humility.

In the end, goodness did win in the Metropolitan Opera’s La Cenerentola. The cohesive cast played off of each other supremely and was supported by Maestro Luisi and the Metropolitan Opera Orchestra. It is rare to see a full production and all of its moving parts come together so impressively; but when it does, the true star is revealed.. Rossini!