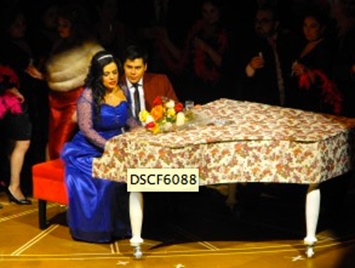 A romantic and festive «Traviata» in Concepcion.
The Verdi’s opera sounded fresh from the hand of the Orchestra Sinfónica Universidad de Concepción, in a assembly that served to commemorate the bicentenary of the composer In the bicentenary of Giuseppe Verdi, Corporación Cultural University of Concepción (CORCUDEC) brought to stage one of its most beloved opera, «La Traviata». This production corresponds to the annual title which performs the penquista season, and also complements the concert made by the U. of Concepcion Symphony Orchestra last June in tribute to Richard Wagner, composer who also celebrates 200 years.
And it would be fair to starting talking about the orchestral group, because this sounded flawless during almost the whole of the opera. The delicate and firm retrieved sound was managed with great skill and sensitivity by the Canadian Julian Kuerti, who holds the position of Senior Director of the Orchestra (in practice, is as its head). The orchestral accompaniment was vital as support for singers, achieving a sound marriage that made this «Traviata» a great listening experience.
Their impossible love story that ends in tragedy, as known by many opera lovers, was clearly told by the team led by the Director Gonzalo Cuadra. Sober scenic designs and lighting of Bravo Francisca, gave rise to plastic pictures completely in accordance with the character of each scene, thus achieving the necessary differentiation. More fragmented was the result of the wardrobe for Marianela Camaño, showing not a stylistic unity with its marriage of modern clothing, considered informal members of the choir and some more «classic» designs.
The cast was led by Argentine soprano María José Dulín, who embodied the suffered Violetta Valery, showing her fragile and tormented by the threat of death (aptly represented by three extras in dark suits that haunt her constantly). Her vocal performance was powerful, making the subtleties of style required by the role, but lacked a greater share of drama in the fatal outcome of the final act.
Alfredo was played by the Peruvian tenor Andrés Veramendi, showing very even in the vocal and emphasizing with his characterization, the deep love of his character for the protagonist. This was materialized in a totally passionate Alfredo, and which took the brunt of the romanticism exhaled in this staging.
The Chilean (and penquista) baritone Rodolfo Seguel, who shone in the «Don Giovanni» in the city of Bío Bío, last year had an outstanding performance as Germont, Alfredo’s father. Distancing himself from comic roles in which he has triumphed, his characterization here was compelling, thanks to a performance that conveyed empathy for this parent concerned for the feelings and fate of his son. Excellence in the scenic conveyed with his musical performance.
A point that deserves to be highlighted in this «Traviata» was its celebratory nature. We say it for the joy showed in the two scenes of celebration that includes the work (start of the opera and the second scene of Act II). Those were two moments full of humour, lively, although with some disorder in the use of scenic space by members of the choir symphonic U.de Concepcion (director, Carlos Traverso), which, however, had a proper musical performance. We could say that these parties of the work (including the famous toast of Act I), symbolized the celebration of the great composer in his Bicentennial.
Alvaro Gallegos M.18/08/2013
Traducción. María Garcia-Rosado

The VSO prays for the victims of Paris

Florencia in the Amazon. Catan. Washington