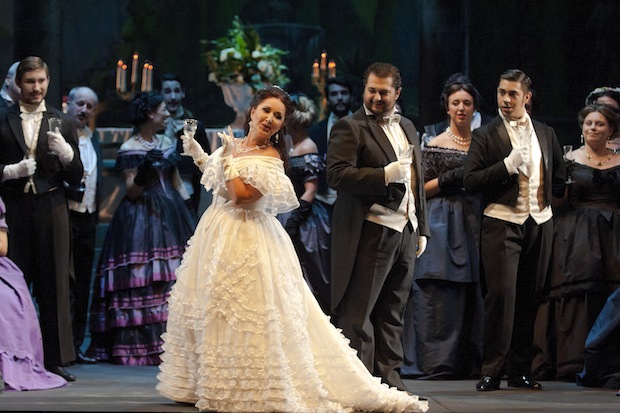 The previously so-called festival “Amigos de la Ópera de la Coruña” (friends of Opera in La Coruña, Galicia, Spain) has taken the name of “season”, after the Mozart’s Festival disappearance in the town. Big, stable “corps” have settled, and so have a bunch of diverse and attractive opera proposals: from La Traviata to Attila, to La Fida Ninfa, Ermione, or The Magic Flute; as well as a magnificient schedule of recitals and names such as Mosuc, Nucci, Albelo, Juan J. Rodríguez, Pape, Jaroussky, Terfel, Goerne, Dessay or Lindstrom. These characteristics make of La Coruña a reference point for every passionate soul for the opera around the world. 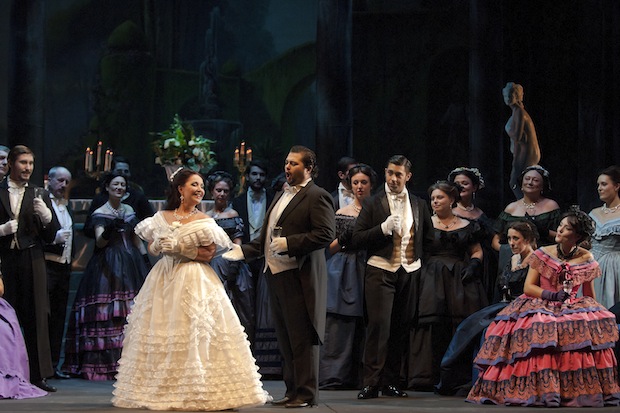 With these premises has begun the Temporada Lírica de La Coruña 2014/15 (La Coruña 2014/15 Lyric Season) some days ago, opening with an essential title for every opera-lover: La Traviata. It might not be the most complete between the Verdi compositions, but it is undeniable that it remains one of the most emblematic operas of the Busetto genius. Elena Mosuc starred in the opening in La Coruña as Violetta. An excellent performance, we must add, that thrilled us with her wide register and her ability to reach higher tones during the I act, like the non-written E flat by the end of “Sempre libera”, her powerful dramatic vocal quality in the II act duet along Gertmont or the overwhelming and touching “Addio del passato” she delighted us with, which she offered in its complete version, earning a well deserved ovation, applause and “¡brava!” screams from the crowded public in the Palacio de la Ópera. She was generous with the higher tones, with a homogeneous voice, rich halftones, and elegant and faultless phrasing, which make of Elena Mosuc a referential Violeta at the moment. 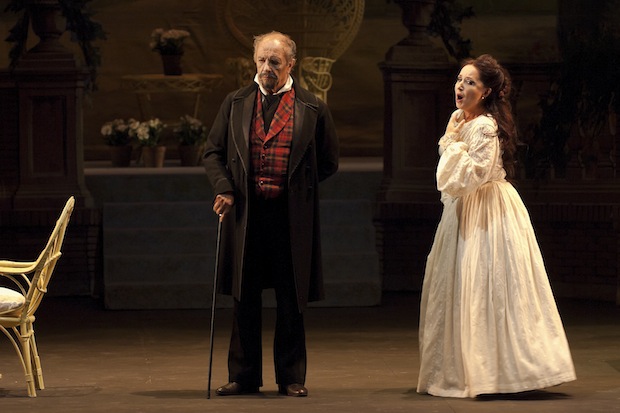 We are not discovering Celso Albelo: we have the luck to say that we have been following his track and evolution lately. It looks as if the canarian knew no borders. After his Alfredo debuting role in Spain, his voice has grown in halftones while his higher tones are not being affected by it. He has everything to become Violeta’s lover. He performed a perfect recitative (“Lunge da lei”), recreating, refining and giving every sense to the text, reminding us of Kraus in his strong and soft phrasing. He also reminded us of Kraus in the reply after the cited “Sempre libera”, or in his use of portamento and attacks. But… Albelo is Albelo, though. With his own characteristics: a magnificent legato, a liberated voice, harmoniusly rich and with some brilliant higher tones (what a tremendous final C4 he delighted us with in the cabaletta!). He was simply superb, both vocal and scenically, during the last act. 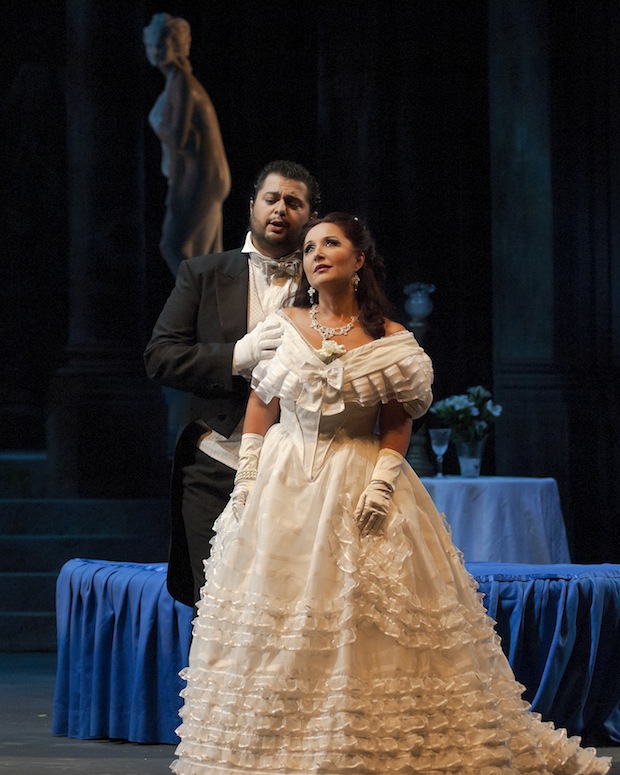 It is a complete luxury to have Leo Nucci as Germont. There’s no doubt that he has perfectly assumed the baritone verdian roles. He is evidently comfortable in them. He might have omitted some of the ornaments in “Di Provenza”, but the verdian soul still remains in his style. His higher tones are still tremendous and glittering (such as the F in this air). He performs imbuing every word with sense, he controls the phrasing and his style is purely verdian. His higher tone performances are still one of his main characteristics, and he even dared (strange thing this days, because it’s usually ignored) to perform the cabaletta “No, non udrai rimporoveri”, which he performed with a brilliant verve. His vocal and scenic duo performance along Violeta was masterful, you could see he was enjoying his role in “Pura siccome un angelo”. In “Di Provenza” he perfectly showed the duality of an autoritarian but at the same time sensible and loving father, vocally “cradling” his son to convince him to return back home. After the warm applause of the audience, he repeated the air, and although he forgot to sing a line (“il tuo vecchio genitor”), he smartly overcame the problem, and brilliantly made an anecdote out of it. 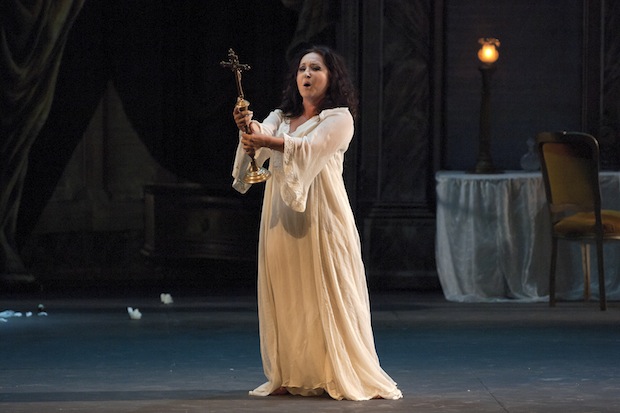 No doubt that Ramón Tebar completes, among the others, the poker of aces in this performance. He was a discovery in the Lucía one year ago, and it’s still a delight to count on his conducting, for he is a great musician, a great voice-mélanger, aware of the variations in these sheets of music. He did amazing tempos, a remarkable overture, and a delicate and touching interpretation of the sheet of music –as a whole.

As well, we are not discovering anything new about the quality of the Galicia Symphonic Orchestra: it is a total delight to listen to this group of professionals, who remain the same for the whole opera season. If there’s a flaw, it might have been some decibel excess at some points, in spite of Tebar’s conducting. 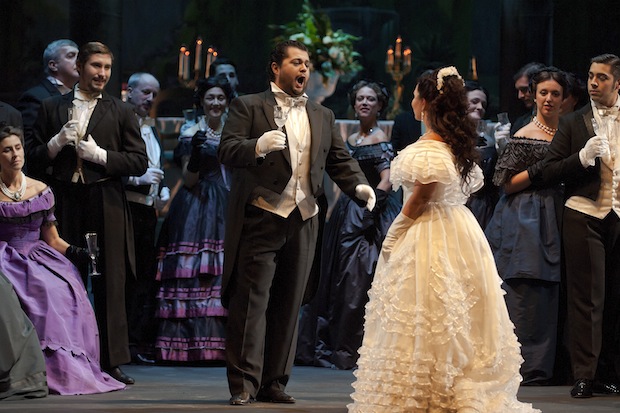 Magnificent –although scarce taking into account their qualities– the second role singers César San Martín, Francisco Pardo or Nuria Lorenzo (who after her recent debut as Azucena seems to be able to get more important roles).

The production came directly from the Teatro della Opera di Roma and was shown for the first time in La Coruña. It was a beautiful proposal, that of Mario Pontiggia on the stage backdrops of Izzi-Roma, that represented the rooms and even took care of the ceilings where the action took place, such as the panelling in the final act. A most Smart illumination from Santiago Mañasco, and a spectacular costume design from Tirelli tailoring, inspired from Visconti’s“Il Gatopardo”. Pontiggia developed in a wise and expert way the famous gypsy and toreros’ choir, which it’s no difficult to transform into something banal and previsible. This time, a couple of dancers (a torero and an andalusian dame) elegantly gave life to Piquillo’s plot. By the way, it was brilliant at this point the OSG choir, conducted by Joan Company. 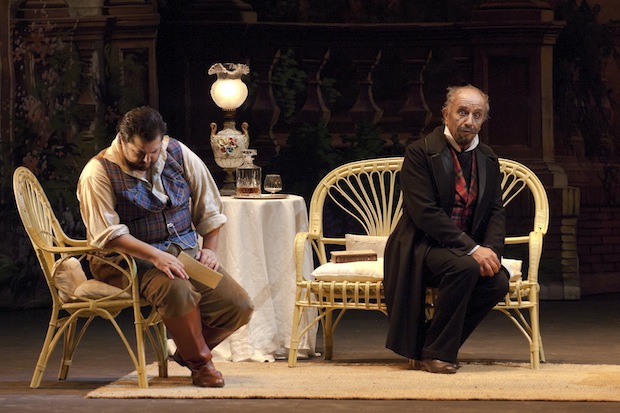 As a whole, a great unforgettable performance, and we hope and wish great successes –if this path is respected– for the new seasons of the “Amigos de la Ópera de La Coruña”.