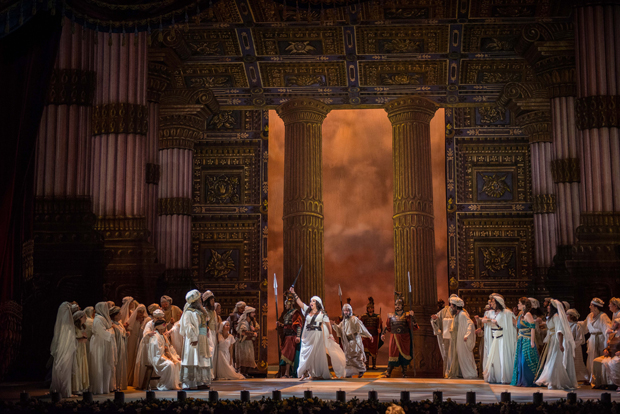 The premiere of a new production of Verdi’s Nabucco, by the Florida Grand Opera (FGO) on the evening of Saturday 26th January,  was peppered with the usual applause and bravos to the interventions of the singers and the chorus, with particular attention to the Orchestra under the masterful conduction of Ramón Tébar, culminating with a long standing ovation at the end, with emphasis on the two stars of the night: Maria Guleghina, as Abigaille and Darío Solari in the titular role.

However, the function of the Sunday, with the second cast, in which the protagonists were replaced by Susan Neves and Nelson Martínez, respectively, was not less successful. Even could be said that the public, most large, was more enthusiastic and generous providing samples of satisfaction. Samples that, on the other hand, provoked the missing of the end of almost all acts and arias, because attendees throw themselves, before music ending, with that kind of «early applause» of which the Miami public suffers from. Unfortunately, in that function it could not be heard the turn off the pianíssimo of the final of the famous choir Va pensiero… Frustrated expression of members of the choir and, in particular, of Tebar was completely unnoticed, because in the bis, which was requested, through the supertitles, the participation of the public, they returned to do the same. This custom to repeat this beautiful page with the public (though its legitimacy is questionable) can be tolerated in Italy, but in Miami, is to impose an ordeal to the public with good ear. Also that such intense moment is diluted in nonsense that clashes any way. 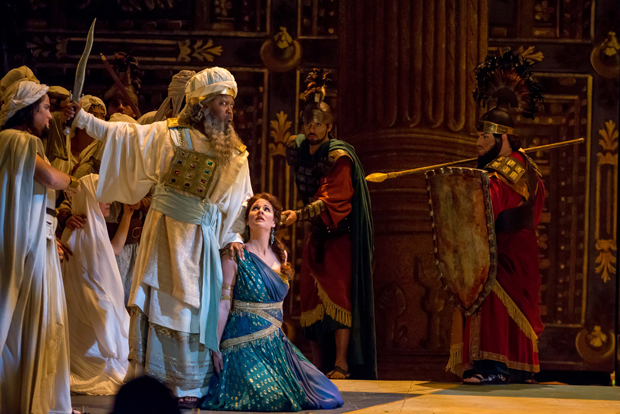 But practically this bis is the only truly reprehensible of this production. On the night of the premiere. Guleghina shone as ever in his dreaded role, demonstrating that her voice retains the powerful projection and breadth of records that characterizes her, even though some treble were forced. The public applauded it wanting, though her Italian diction was very flawed, at times seemed as if she only sang music with the vowels and left consonants to the imagination of the listener. Trick very popular with certain divas of the 50.

As if someone had noticed this problem of her colleague, on Sunday, Neves was very neat and articulated in her Italian, though she also had problems in the treble. What not subtracted the well-earned standing ovation at the end, and the special applause for her exquisite final aria: «its me… morente… esanime». 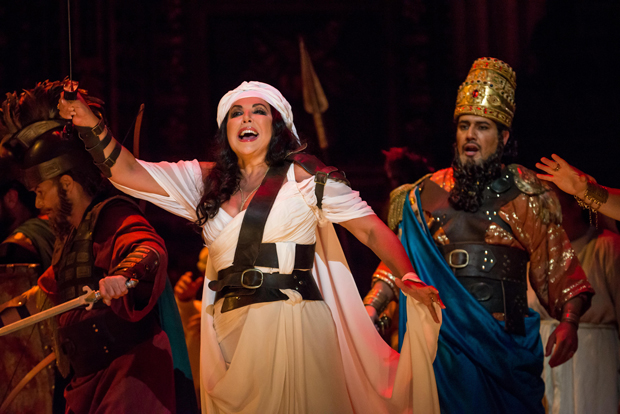 As for the titular role, makes it difficult to establish differences because both Solari with his beautiful voice, like Martinez with his powerful projection were brilliant musical and dramatically, while the libretto calls for sudden changes in character ranging from arrogance into submission, and savagery to religious devotion. Ovation apart, in both functions, deserved Kevin Short, who walked safely the difficulties and nuances of his role as Zaccaria. 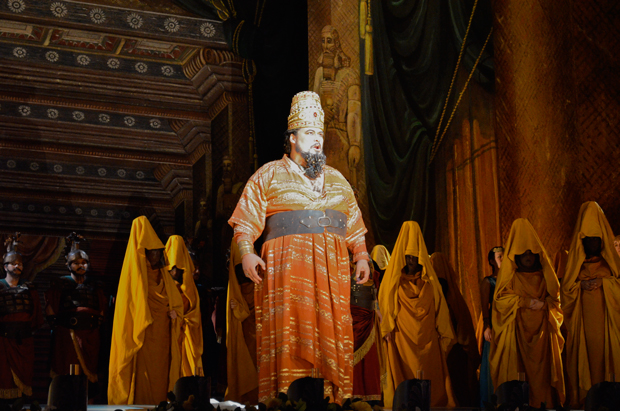 Likely, Mabel Ledo as Fenena, gave the Miamians, who already have applauded her in recitals, the pleasure to appreciate her strong musical and histrionic skills in a theatrical context. Very well Martin Nausspaumer and Adam Lau in their minor roles of Ismaele and the priest of Baal, as in the Jouvanca Jean-Baptiste and Betsy Díaz which alternated in the role of Anna. 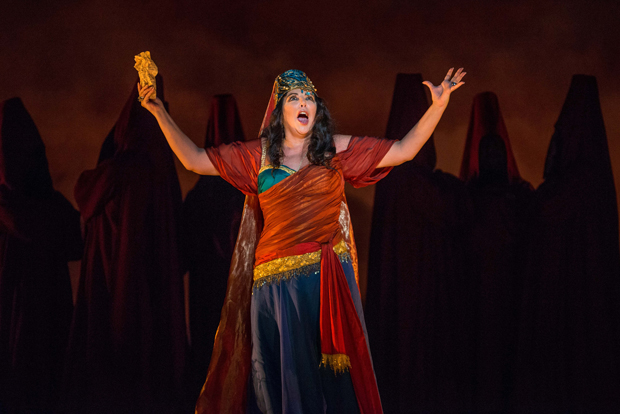 Though Mark McCullough lights made very good paper, the stage direction of Leigh Holman was too static, especially in times of fights. The stages of Thaddeus Strassberger, intended to evoke those of the time of the premiere of this opera, were a little confusing, since they used as backdrops of intermediate a neoclassical box with an “eunucco” Apollo in his celestial chariot and then a den of lions, as the of the Prophet Daniel, that nothing have to do with the story. Untimely the agave and American Palms in the hanging gardens.  Also the costumes of the Babylonian soldiers (design by Mattie Ulrich) were not very clear with plumes, capes and Roman swords. Although too much rigor not be required when the same plot has the incongruity of a birth on paper in a civilization that didn’t know one or the other. 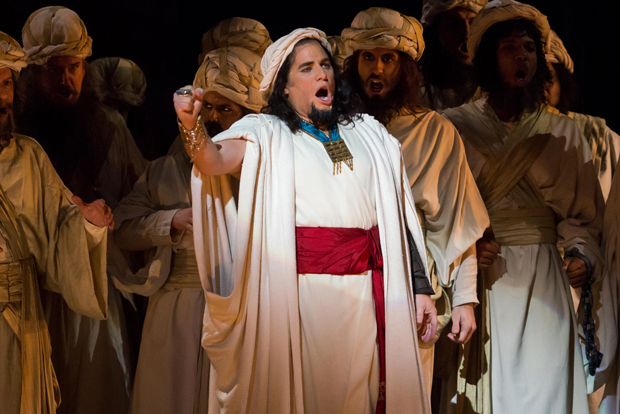 But these are details that most people are not aware, this production is superb and now only by the famous choir, worth going to see it. Kudos for the choral master Michael Sakir, who not only in Va pensiero… makes them shine. 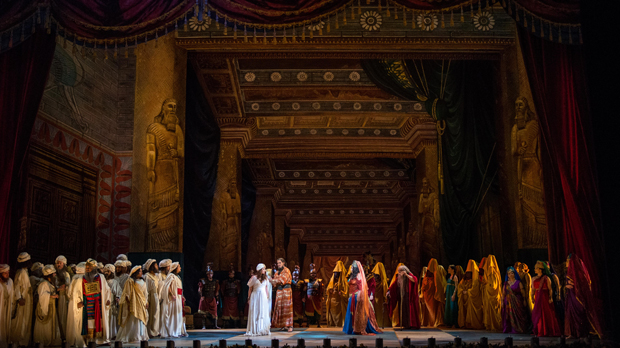 While Nabucco is not the best of Verdi, and that the argument it is variegated and absurd, this setting of the FGO (in cooperation with the Washington National Opera, the Minnesota Opera and Opera Philadelphia) rescues it with dignity to the public of Miami that did not see it for almost 40 years. Its double cast invites you to see it more than once. 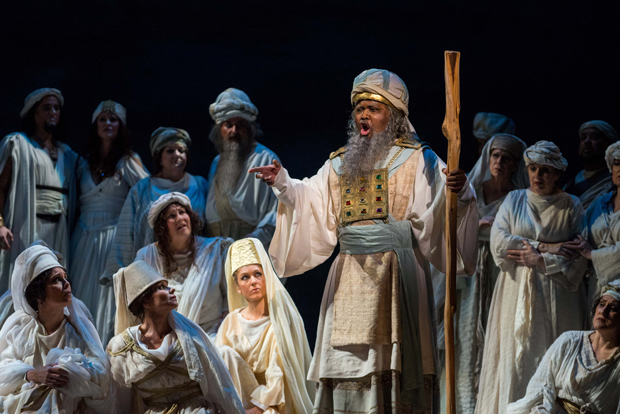 Nabucco’, by Giuseppe Verdi, by the Florida Grand Opera in billboard until February 8. Tickets and information: 800-741-1010 and www.fgo.org