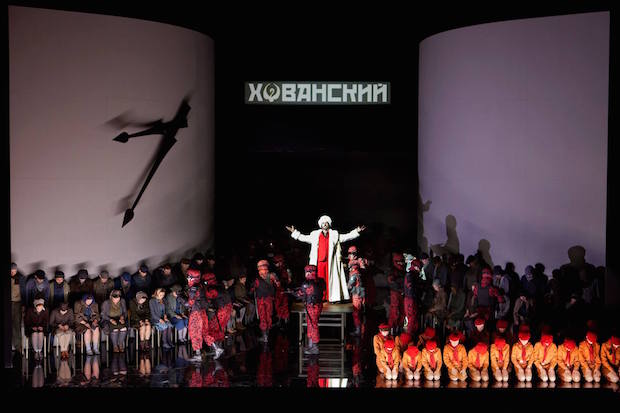 The clash of political leaders over the question of whether Russia should continue its own traditional course or rather look for more rapprochement with the West and religious fundamentalism – although these are the ingredients of the unsurpassed masterpiece Khovanshchina that premiered in St. Petersburg nearly 130 years ago, the opera could hardly be more topical.

The joint rebellion of Prince Ivan Khovanski and conservative Orthodox followers (Old Believers) against the reformist and pro-Western ‘antichrist’ Peter the Great was the theme that Vladimir Stasov presented to his friend Mussorgsky as a theme for his new opera project. But despite the intriguing plot of the Khovanski case, the genesis of the opera has all the characteristics of a never- ending story. Censorship at the time of Mussorgsky did not allow a tsar of the Romanov dynasty to be portrayed on stage. Hence, the figure of Peter the Great had to be circumvented. But that was not the only obstacle which Mussorgsky had to deal with – the composer also suffered from constant time constraints. As a result of the abolition of serfdom by Tsar Alexander II ten years earlier in 1863, the born aristocrat was forced by financial necessity to take a job as a civil servant. On top of that he worked on several projects simultaneously. As a result, and in spite of intensive preparatory work in 1873, Mussorgsky wrote only six scenes for Khovanshchina in the next seven years. Fortunately, he completed the libretto in 1879, which after his death two years later, would serve as a guide for the further completion of the masterpiece. When Khovanshchina premiered in 1886 in an orchestration by his friend Rimsky-Korsakov, several scenes still ended very abruptly and some storylines were not fully developed. In 1913, Stravinsky wrote the great final chorus of the opera, based on an Old Believers ‘ song that was found between Mussorgsky’s notes. The completion and orchestration of the opera by Shostakovich, which is considered to lean more towards the original score, premiered only in 1960. For the version staged by the Opera Vlaanderen, additional changes were made based on manuscripts found after 1960.

The choices of David Alden

Despite the beautiful music and the intriguing plot based on historical facts, the opera remains distressingly rarely programmed in the West. This has a lot to do with the nature of the opera itself, which is set in several very different and vast locales, and also requires a large orchestra, chorus and ballet. Even when the opera is performed in a large theater, a director has a lot of difficult decisions to make. The «translation» of an epic story to the reality and the limitations of even the most modern theater techniques requires a great capacity for ‘problem solving’. With his choices for this new production David Alden again proves his talent to abstract issues and bring them back to their true essence. This is expressed through the concept for the set of movable curved walls that create a haunting Kafkaesque atmosphere. By intelligent and unmistakable signals Alden and his team –Paul Steinberg (decor) and Constance Hoffman (costumes) – help the audience to understand within the intricate plot who is who and where the action is taking place. For example, a bizarre icon on a bare wall and costumes inspired by the traditional costumes of the Amish, show the public how the Old Believers have completely detached themselves from the society in which they live. The Streltsy in commando outfits come straight from the evening news on television and clearly refer to the Russian-Ukrainian conflict.

Alden’s strong development of characters and their interconnection all the way through the opera makes this a very interesting production. An example is the scene at the end of the second act where the three leaders Khovanski, Dossifei and Golitsyn clash. Placing the chorus inside the auditorium along with the other spectators, the public, to witness Goltsyn’s being ousted from his position and exiled from Russia at the end of the fourth act is very effective. Worth mentioning also are the impressive and ominous shadows created through the ingenious lighting by Adam Silverman. The building up of the final scene, introduced by tremolos in the orchestra and leading to the mass suicide by immolation of the Old Believers is extremely strong. In an excruciatingly slow crescendo Alden has flames projected onto the chorus and soloists. This captivating image has a gripping effect.

Yet even the intelligent choices of David Alden have a downside. For example, the entrance of Ivan Khovanski lacks grandeur as a result of the small passage between the moving panels, the grandeur with which the great leaders of Russia have surrounded themselves throughout centuries, and which we recognize in the coronation scene from Boris Godunov. The same grandeur which we annually witness through the media, when Vladimir Putin solemnly proceeds from behind a golden gate all the way through the vast halls of the Kremlin to give his speech. Some other choices, such as the omission of the Persian slaves’ ballet are equally remarkable, but work amazingly well. In fairness, we do have to ask ourselves though whether some of these choices would remain as viable with a different, less talented cast.

The chorus and orchestra of Opera Vlaanderen conducted by Dmitri Jurowski surpass themselves. The orchestra makes the dense, dark orchestration so characteristic of Mussorgsky’s work come to life. A couple of very nice solos by the woodwinds too. Nothing but praise also for the enhanced chorus of Opera Vlaanderen, which performs the Streltsy, Muscovites and the Old Believers in this choral opera. Their convincing acting and powerful sound that never gets strident explains why this chorus, conducted by Jan Schweiger, is on many opera director’s wish list.

Another asset David Alden has is Croatian bass Ante Jerkunica who makes his debut as Ivan Khovanski. With his exceptional acting talent and strong personality, he turns some of the director’s unconventional choices into a success. He gives a very strong performance in the already mentioned clash of the main characters in the second act. Even more impressive is the way he builds up the tension and temperature in the theatre in his last scene; and single handedly erases any memory of the Persian slaves’ ballet. Also vocally, Jerkunica’s performance is solid, with a very noble, warm voice that resounds evenly over the entire tessitura. Impressive performance also by Alexey Tikhomirov as Dosifej, who moves the audience with his powerful and velvety sound. Much less impressive is his colleague Alexey Antonov who, with his rather thin and sometimes nasal sound, is for me clearly the weak link in this production. Vsevolog Grivnov is vocally perfectly cast for the role of Prince Vasily Golitsyn. However, as a character, he doesn’t measure up to the monumental strong personalities and physical appearances of Khovanski and Dosifej. Elena Manistina on the other hand is a Marfa to die for. Her passaggio may well be more noticeable than that of her more Western-sounding colleague Julia Gertseva, but this is more than offset by her lush, powerful and typically Russian voice. Not only her famous aria, in which she predicts the disastrous fate of Golitsyn, is very strong, but in the last act she is equally convincing. The intriguing part of Sjaklovity is sung by Oleg Bryjak. In his aria his wonderful voice cuts right through, but at times Bryjak really puts his voice under enormous strain. Dmitry Golovnin, who debuts in the role of Andrei Khovanski, and also the smaller roles maintain the same high level of the vocal soloist cast.

Purgatory is not that bad, after all – SSO performs Elgar’s...