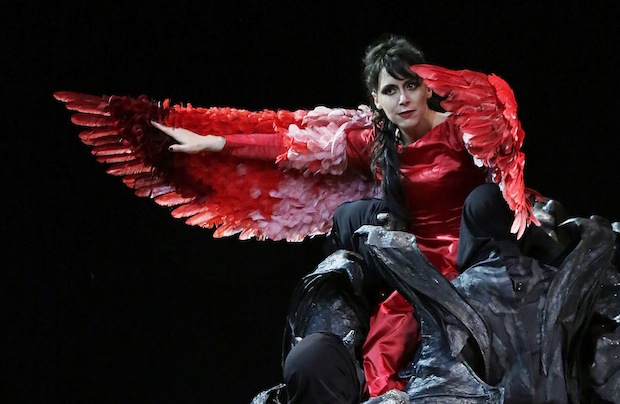 Premiered on November 11, 1817 at the Teatro San Carlo in Naples –where Rossini conducted his most renowned experiments–, «Armida» is a great opera for a great diva. Written for his wife-to-be, the soprano from Madrid Isabel Colbrán, it was totally forgotten until Maria Callas unearthed it in a legendary production in Florence in 1952. More recently, in 1993, Renée Fleming embodied it in Pesaro, when she was almost a total stranger, and afterwards –when she already was glamorous star– brought it to the MET, some decades later.

Carmen Romeu incarnates the role as good as she can. In her third-and most ambicious- participation in the event, she has used her weapons at her best, such as an excellent technique (which allows her to show her agility off), safe trebles, an elegant line and delicate accents. Not to mention a graceful presence on stage, enhanced by the elegant costumes of Giovanna Buzzi, in black and red. Thus, it is not surprising that the vision of the magician by the Valencian singer leans more towards a loving and a pathetic side than to a fierce and vengeful side, for it lacks some serious and resounding central and deeper tones, although it should be noted that in her final invocation to the Furies, she completely did her best.

In this opera she also has to face no less than six tenors as a single woman –actually seven, considering the brief episodic character of Eustazio-, some of which play two roles, since they only appear in one of the three acts. Among them stood two very safe values ​​in the festival, Antonino Siragusa and Dmitry Korchak as the rivals and champions Rinaldo and Gernando, as well as bass Carlo Lepore as the evil wizard Idraote.

In this production, which has opened the XXXV edition of the ROF and which has been dedicated to the recently deceased Claudio Abbado –whose «Viaggio à Reims» version in 1984 marked the final accent for the Pesaro festival–, a projection of the opera could be enjoyed on a large screen in the Piazza del Popolo, in the now historic Luca Ronconi’s production. In this latter glory of the Italian theater, he has also taken this «Armida», using all his subtle irony to tell this story, based on the «puppi» traditional Sicilian puppets, whose figures are accurately drawn from the «liberated Jerusalem» of Tasso, which serves as the main source to this piece of work. There are other several nods as demons inspired by William Blake and the Pre-Raphaelite gallant air meetings, showing the veteran signature of the maestro.

All this was supported by an admirable acoustic density, Carlo Rizzi’s responsibility as head of the Orchestra of the Teatro Comunale of Bologna, which along the choir of the same theater, is one of the fundamental strengths of the festival. Mediocre however was Michele Abbondanza’s ballet, although it was always possible to keep the eyes closed and enjoy in the sublime music.

Rossini in times of crisis

After this lavish opening, with «Aureliano in Palmira» we were under the impression to be attending a “Rossini for times of crisis”. Starting with the opera itself (premiered at La Scala in Milan on December 26, 1813), which is not among the most fortunate ones of an author who was still digging in search of his personal style. Thus, there are several references to the immediately and much brighter previous, «Tancredi». The strange thing is the use of several passages that will later appear in the «Barbiere di Siviglia» (including the overture and opening chorus, that will become the famous cavatina from Act I of Count Almaviva «Ecco il ciel Ridente»), although treated here with another dramatic urgency, as in the vibrant end of the first act.

Mario Martone fully matched in 2004 and 2012 with a «Matilde di Shabran» that was one of the greatest vehicles for Juan Diego Flórez’s brightness. This time he has gone to a modest realism, which mixes some sort of “moors and christians” of the Spanish celebrations and doesn’t waive to even take a small herd when the banished hero Arsace takes shelter among the shepherds, thus helping to accentuate the bucolic nature of that moment.

Although we should acknowledge that he had some new ideas, such as taking the continuous on stage, that made it gain loudness and was of support to the singers in their not-so-easy roles. It was fused excellently with Lucy Tucker Yates playing the pianoforte and David Ethève as principal cellist of the Symphony Orchestra of Galicia, which left a good memory after its performance in the festival.

The role of Arsace is the only one of all Rossini production that the composer aimed for a countertenor voice (a voice which he openly stated that it was not to his likings), the famous Giovannu Battista Vellutti, for which he wrote a part of great virtuosity. Mezzo-soprano Lena Belkina from Uzbekistan showed perfect musicality, with a warm voice and good colorattura resolution (and physical ressemblance to Joan of Arc), although perhaps she didn’t inspire the sensation of a «sounding phenomenon» as her illustrious predecesor did.

Fortunately, American tenor Michael Spyres and Australian soprano Jessica Pratt were fabulous as the Roman conqueror whose name matches the title of the opera, and the dethroned Queen Zenobia, who faced with absolute tranquillity every pyrotechnics and acrobatics of their respective roles. The American Will Crutchfield joined the general grayness joined with an conduction with a few little nuances and scarce subtlety. Surprisingly loose as well were the second roles, except for the Italian mezzo Raffaella Lupinacci as the attractive and spurned patricia Publia.

«Il Barbiere di Siviglia» was shown as a a half-represented version, under the Academy of Fine Arts of Urbino, really reduced to its minimum. Sardinian mezzo Chiara Amaru clearly showed her rossinian class, although she certainly shines more in transvestite roles, lacking some spice and grace to her Rosina role. French baritone Florian Sempey has magnificent vocal means, but he was lacked some little proficiency as Figaro. Both Alex Esposito and Paolo Bordogna are two great singers, who have already given sufficient proof of his mastery of this repertoire, although they might be too callow to portray Don Basilio and Dr Bartolo. Possibly the best in the cast was the Argentine tenor Juan Francisco Gatell, who repeated as Count Almaviva, this time being able to show off his important theatrical qualities as much as his excellent singing preparation.

The musical conduction of Giacomo Sagripanti failed as well to take flight, despite the usual quality shown by the Orchestra of the Teatro Comunale of Bologna (not so much was the quality shown by the local San Carlo Chorus, whose participation had a true «amateur» tone). Actually, the function failed to overcome the superb 2011 Alberto Zedda’s version. 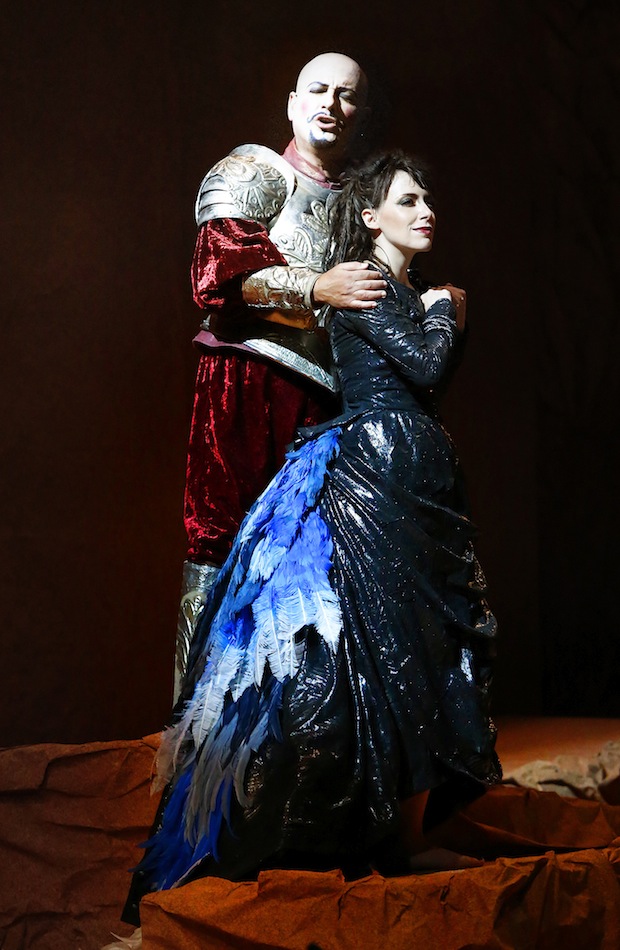 A lovely look back

However, revisiting «Viaggio à Reims»  was a real balm, designed by Emilio Sagi fifteen years ago and which since then has remained incombustible, a springboard for new talent, among which we have discovered this year the 23-year-old Spanish soprano Isabel Rodríguez García and the spirited baton of a little older Mexican conductor Iván Lopez-Reynoso (Guanajuato, 1990), who could take with great verve and understanding the young members of the Gioachino Rossini’s newborn Filarmonica. Also it’s worth mentioning Korean baritone Yunpeng Wang (Don Profondo), chinese mezzo Aya Wakizono (Marchesa Meliboea), or Armenian soprano Hasmik or Torosyan (Corinna). But the entire company proved, once again, that music composed by the most inspired Rossini triumphs over dark times and always inspires a witty smile.

We were able to attend the rest of the program, an interesting evening in the Rocca Costanza dedicated to the enigmatic vocal versions of «Sins of old age» (with its haunting harmonies, some as striking as those of the «Choir of the Titans» for four basses), with always-ready Anna Bigliardi on the piano and soloists from the Accademia Rossiniana, whose qualities we had already appreciated in the «Viaggio à Reims». We were able to attend as well a delicious translation of the «Six sonatas for four voices» by Franco Petracchi bassist, violinist Salvatore Accardo and two of his students: violinist Laura Gorna and cellist Cecilia Radic. It was delightful being able to contemplate the rapport between the elegance of the two veteran maestros and the energic youth of the girls, written in these pages by a teenage Rossini, but who already knew every rule of the Central European chamber music (with obvious echoes of his admired Haydn, Mozart or Schubert), making clear at every momento his personal style.

New productions have been announced for next year, such as «La Donna del Lago», by imaginative Damiano Michieletto, and «La Gazzetta» (which has a strong challenge ahead because of the unforgettable version of Dario Fo), and a semi-staged version of «Adelaide di Borgogna”, as well as, in between concerts, the “Messa di Gloria”.

The VSO risks it in its premiere