Opernhaus, Frankfurt. 9 June 2013. Ends up my stay in Frankfurt with this representation of La Fanciulla del West, which has never enjoyed great popularity in Spain, being its schedules in our opera houses rather scarce. The last time that it was represented was in Seville more than 4 years ago.

In Frankfurt was offered a production from the Stockholm Opera and carrying the signature of Christof Loy, one of the most common stage directors in these parts.

Admittedly, that Puccini made it very difficult for the modern stage directors, since in his best-known titles scenarios and times are so precise that barely fit transposition, to which so fond are the current stage directors. Even trying to, what a stage director can do with the atmosphere of La Fanciulla del West? I am afraid that nothing and that merit is of Puccini, which is who chose and intervened in the scripts. Christof Loy makes a traditional stage production, especially in the first two acts, in which the Polka can not miss nor Minnie cabin. Only in the third Act passes the action from outside to inside a space that reminds too much of the first Act, which brings some inconsistency by the presence of Minnie from the beginning. The sets and the costumes bear the signature of Herbert Murauer and are conventional, but adequate, not missing anything of what sets the libretto, Bernd Purkrabek lighting was good.

Christof Loy tells the story as a homage to silent movies, starting with projection of credit titles, while an Amazon (Minnie) rides by Monument Valley, coming toward the screen and getting of the horse at the same time the projection stops and enter with her pistols the real Minnie. Coup, which has earned a standing ovation from the audience. At various times, including the poker game, images of the performers are projected in black and white, as if it were a film.

Stage direction was really good, as it is usual in Christof Loy, with a great job with the co-main characters and choir.

Many think, and not without reason that La Fanciulla del West is the most Wagnerian opera of Puccini, due to its spectacular orchestral treatment. I remember reading long ago Gianandrea Gavazzeni said that the protagonist of this opera was not Minnie but the Orchestra. It has nothing, so strange, that the great masters want to consuct it. If a few days ago was Lorin Maazel who directed it – in concert – in La Coruña, here the baton has taken its music director of the Frankfurt Opera, Sebastián Weigle, who rarely leaves the German repertoire and, if I am not misinformed, was the first time that he was heading a Puccini opera. Reading was brilliant, maybe, very dramatic and giving such prominence to the Orchestra that the singers had to stand as they could from the storm that came out of the pit. I would have preferred a more balanced reading and that also he had put in evidence the lyrical and beautiful moments of this score. The Frankfurter Opern und Museumsorchester offered a spectacular sound. Good performance by the choir of men of the Frankfurt Opera. Apart from the Orchestra, the protagonist, Minnie, was the Dutch soprano Eva-Maria Westbroek, very convincing and very suitable to the demands of the character as an interpreter. We have a dramatic cut soprano, with volume more than notable, good technique and expressiveness and gifted actress skills. Her exclamation Tre assi e un paio at the end of the poker game was of anthology. Without detracting from her performance, I found her acutes end has lost harmonics and is now rather more compromised than not long ago. Now I understand that she has recently added the character of Dido in the Trojans by Berlioz.

Carlo Ventre was a solvent Dick Johnson, brilliant, as always, in the high notes, which are full sound and spacious, while the Centre does not have the same quality but here the interpreter has never been anything exceptional.

British baritone Ashley Holland was a no more than correct sheriff Jack Rance. The voice is wide and somewhat opaque, but defectively issued in the central register, which makes that he is shaded so often by the Orchestra.

The rest of the numerous cast did it properly, and must point out the full of sound Wowkle, of Elisabeth Hornung.

The theatre offered an occupation of around 85% of the capacity. The public was very warm with the artists, being the biggest cheers for Eva-Maria Westbroek.

Representation began promptly and had a total time of 3 hours and 4 minutes, including two intermissions. Purely musical duration of 2 hours and 11 minutes. The final applause lasted for 7 minutes. The theatre offered an occupation of around 80% of its capacity. The price of the most expensive ticket was 82 euros, having places in the ranks of back seats for 49 euros. On the upper floors there were entrances between 27 and 49 euros. The sides of the upper floor costed 13 euros.
José M. Irurzun 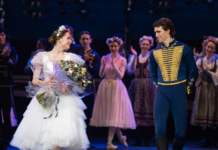 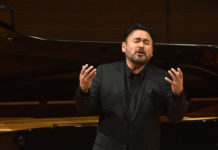 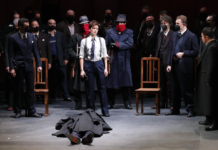