Deutsche oper Berlin decided to stage well known and awarded version of  one of the most famous Bellini’s operas. And here it is- La Sonnambula, in one room, meeting her alter-ego, accused of being unfaithful. A lot of alcohol, somnambulism and beautiful belcanto.

Jossi Wieler and Sergio Morabito set the action of the opera in one big room, full of old banquet tables and benches, different old-fashioned furniture and- most of all- people. There is the feeling of one closed community- knowing everything about each other and what happens in the village. This staging emphasizes the relationships world- one of Bellinis main threads. At the beginning one can see the different concrete characters- there is Teresa- an old protectress of young (and lost) Amina. There is Elvino- passionate lover and Lisa- desperately wishing to be with him (so desperately, that she drinks too much) and an old and distinguished count- Rodolfo, who then appears to be the “honest” and caring. Bellni’s plot remains the same- the “somnambulism story”, although, when it comes to music, in this staging there are few more (longer) pauses, because of the enormous  noise made by folding and unfolding the tables and benches. Moreover that noises are made during the music too and this could be quite annoying especially when it comes to beautiful and delicate Bellini’s ouverture (destroyed by action sounds). The plot remains the same, but directors decided to add one “mistery” character- Amina’s alter-ego (Bellini’s ghost appearing in first act), who is said to be her dead mother. It appears in every “cruicial” moment of the opera, sometimes distracting attention from what happens musically, creating a piece of comedy. Amina’s duet with Elvino- ghost, Amina’s somnambulism scene- ghost, Amina’s final aria- ghost. Her alter-ego follows her everywhere, like if it was her inner, “maternal” voice, shown on stage. Another issue is- blood. It appears in the final stage at Amina’s dress. Previous- as wine in the somnambulism scene…

This version presented to German audience, at 7 February, got a round of applause. It was witty and in one time- really serious. Main character- Amina, sung by Venera Gimadieva was somehow fragile and sometimes lost between somnambulism and alcoholism. Lisa- Alexandra Hutton, showed the desperated women, with an urge to get “her man” by every possible way. She was active, often getting all audience’s attention. Jesus Leon played Elvino. His bright, light voice matched very well the young, energetic and charismatic character. One of the biggest round of applause went to Ante Jekunica- a deep, wide baritone, who portrayed Count Rodolfo. His velvety and strong voice corresponded with paternal Rodolfo’s figure. Similar was with Helene Schneiderman. She showed the waraiety of changes in an old Teresa’s character. Starting from strong, authoritative figure, through susceptible to changes, ending as a lost “mother”. Her voice impressed the audience too. Choir and Orchestra leaded by Stephan Zilias tried to make the best of Bellinis demanding music, sometimes loosing the game because of the noisy changes happening on the stage.

La Sonnambula presented by Deutsche Oper Berlin makes one think about nowaday’s society issues. Through bringing the old-fashioned world into the more modern village, strictly portrayed characters and showing the problems of today’s world- like alcoholism or following the authorities. The audience enjoyed Aminas story created by belcanto Mater- Bellini and left the opera house smiling, but one could see- at one time- concerned about adaptation and moving story of Amina. 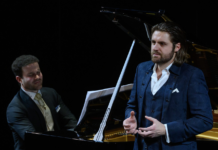 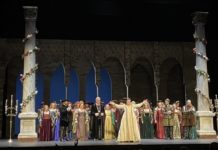 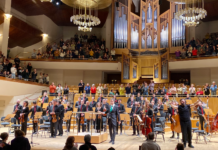