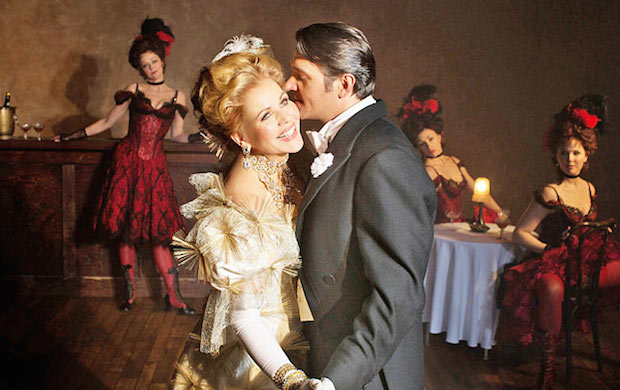 Music royalty from all over New York filled the jewel of Lincoln Center for the Metropolitan Opera’s New Year’s Eve premier of Franz Lehár’s The Merry Widow. Among them were Sir Patrick Stewart, Shakespearean actor most famously known for his portrayals of Jean Luc Picard (Star Trek) and Professor Charles Xavier (X-Men); and Broadway legend and actor Brian Stokes Mitchell. The venue was sold out and even my parterre box seemed to be filled with extra seats to allow for maximum occupancy. The night’s performance was directed by Susan Stroman who, for this new and refreshing production, also donned the hat of choreographer. Headlining the evening was the world of opera’s own diva, American soprano Renée Fleming.

Ms. Fleming floated onto the stage and before a single note escaped her lips, the excitable crowd burst into applause, only ceasing to allow her to sing her opening stanza. Ms. Fleming occupied the role of Hanna, a widow and heiress to her late husband’s millions, supremely. The diva danced delightfully and her dialogue was crisp and natural. Her equal temperament of grace and wit made for a modern and powerful portrayal of the title role.

Completing the American dream team was Nathan Gunn who stumbled onto the stage as the charmingly inebriated Count Danilo Danilovitch. He was charged with the task of marrying Hanna’s millions and keeping her fortune within the poor fictional province of Pontevedro. Though he resisted, there was a twinkle in his eye – and one in hers – as they faced each other for the first time. The spark was lit and their brief glance was all the audience needed to foreshadow their imminent attraction.

Sir Thomas Allen was entertaining as ever in the role of Baron Mirko Zeta, host and oblivious husband to the unfaithful and insatiable Valencienne, sung vibrantly by Kelli O’Hara. Sir Allen, easily one of the greatest voices of the century, and Ms. O’Hara, a triple-threat starlet with television, Broadway and movie credits, brought the steamy adulterous sub-plot to life. Weaving in and out [of the Baroness] was the young American Tenor Alek Shrader who rose to fame after his appearance in The Audition. He sang very well in the role of Camille de Rosillion, the Baroness’s French lover.

Leading this star-studded cast was Sir Andrew Davis who looked completely at home in front of the Metropolitan Opera Orchestra. In addition to conducting all of the major orchestras in Europe, Sir Andrew Davis is conductor laureate of the BBC Symphony Orchestra and the principal conductor of Lyric Opera of Chicago.

The Merry Widow was the perfect production to set up the coming New Year. The opera was entertaining and served to set the mood and whet the appetite of those who would attend the posh gala to follow. Lavish sets depicting the Pontevedrian Embassy and an exquisite Parisian garden with a view of Le Sacré Coeur were just two of the flashy set designs by Julian Crouch. The harem of dancers adorned in masterful costumes by William Ivey Long were an engaging and transformative piece of every party scene.

The Merry Widow is currently in production at the Metropolitan Opera in New York City. Performances run through May 7th, 2015.

The Marriage of Figaro brings Mozart’s Energy to Seattle