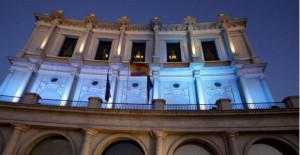 «Cotton does not deceive», and accounts passed Bill: the Teatro Real has increased its deficit ten times more since the arrival of Gerard Mortier to its direction.
In 2009 the exercise had a loss of 417.818 euros and in 2011 has soared up to a doubt of 4.896.737.  Between, the 5.261.309 euros of 2010. Three years after Mortier took control of the institution, the official Spanish Gazette (BOE) makes public the balance sheets of the first two years of management of the Belgian director, and the numbers speak of a Real in serious economic difficulties.
In addition to the deficit, there is a serious problem of Treasury: in 2009 had boxed 1.176.241 euros; in 2010 – when above Mortier – debt soars to 11.826.168 euros and in 2011 it redirects a 4.687.346 hole. In addition, own funds have decreased by 32.6% since his arrival and from 31.087.426 euros in 2009, Real has gone to 20.929.379 euros in 2011. This section highlights in an outstanding way the detriment of nearly a million and a half euros in income from the sale of permanent seats: from the entrance of Mortier has fallen 16.8 percent, from selling in 2009 8.495.413 euros to this number 7.063.049 euros. This newspaper has been in contact with the Teatro Real theatre to evaluate data, although this possibility was declined.
The report also recognizes a loss of 823.573 euros in the fundraising sale of box office provided for in their budgets. And noted a slight increase in income from sponsorship: from 3.100.983 euros to 3.262.321. Other few favorable Mortier management information is the increase of revenue for hire, which passes from 523.057 euros in 2009 to 650.160.
The most favorable news since Mortier direction occurs in the increase of benefits for rental and sale of productions to other theatres: from 206.282 euros to 427.971.
Expense without control
Regrettably, these amounts in favour of Mortier exercises are sunk into debt with the politics, for example, rental of scenery. As well as in 2010 not invested or a euro in the lease, in 2011 decided to spend 332.320 euros. Or in the rental of costumes for productions, which went from 577.248 euros in 2010 to 766.069 in 2011, an increase of 32.7%. But the game that grows more is «Other», which fires 9.724 euros in 2010 to 135.060 in 2011. This section recognizes the increased spending in the audiovisual production (80.447 euros) and the services provided by the Orchestra and choir, one 12% increase.
In fact, the section dedicated to the budget accounting of expenses shows that Mortier spent more than one million and a half of what should be spent by budget forecast in 2010. In 2011 it commits a similar deviation in the established amount.  Headings contemplated show a management unable to accept and respect the budgets approved by the Board annually.
If this is not enough, the Official Gazette (BOE) clarifies that the General intervention of the administration of the State in its supplementary report to the accounts of the fiscal year 2010 audit «found that the measures taken by the Foundation did not conform to the Royal Decree-Law» which requires the reduction of public deficit. I.e., that the measures taken to reduce spending have failed. «Therefore, should take the measures necessary to conform to the regulations in this matter for future exercises», explains, and adds that these measures have been adopted in March 2012. These include the implementation of a pay cut for sections depending on the income level. By the way, the remuneration of the senior management of the Foundation staff has been of 233.046 euros in fixed remuneration (in 2010 was 269.897 euros). The total number of employees in 2011 was 312 people, two more than the previous season.
Public cuts no self incomes.
Dramatic losses if it is considered that also public funding has been reduced by 15.5%, from 28.985.830 euros to 24.493.830. Other institutions such as the Prado National Museum and Reina Sofia Museum cuts of more than 30% of the public contribution have been mitigated with an increase in the earned income. In the case of the Teatro Real, this has not happened.
All an all, these results leave uncovered a questionable management since 2010. In fact, the Teatro Real is the one of the institutions better looked after by the mentor of the contributions of the Ministry of culture (15.471.000 euros, a cut of 10% in the last year), in the autonomous community of Madrid (5.263.983 euros, a 15% cut) and the Madrid Council, which is the only cultural institution that subsidizes: 2.373.772 euros (15% less).
As curious data, the function which grossed more revenue at the box office in 2011 was Werther by Jules Massenet, based on Goethe’s epistolary novel, and starring José Bros and Sophie Koc. He won 1.644.951 euros of revenue in its 12 functions and direct expenses of 1.876.626 euros in its production.
Traducción al inglés. María Garcia-Rosado

President & CEO Simon Woods to leave Seattle Symphony for the...

Candide at the Orpheum Theatre in Vancouver