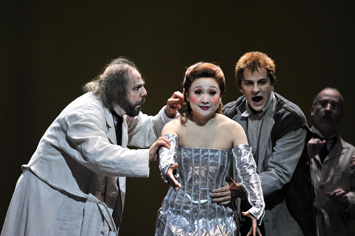 It is well known that this work of Jacques Offenbach was released after his death, being accompanied by a great success. Both circumstances have done that over the years the changes and additions in this opera have been numerous, what did we find different versions and several different editions, so it is difficult to find two identical versions of the opera. The Liceu has offered the integral Edition of this opera that Michael Kaye and Jean Chistopher Keck did in the 1990s, whose most important novelties are, as always, in the Act of Venice, disappearing the Septet, apart from some musical changes and text. I am afraid that they will continue to appear new editions, since the musicological interest joins the economic, in the form of copyright.
The overall assessment of this representation, which offers the first cast of the assembled by the Liceu has been largely disappointing, especially in what refers to the vocal and scenic sections.
The Liceu has offered a new production of the French Laurent Pelly, in co-production with San Francisco and Lyon. Pelly is a stage director who has garnered significant successes in their production of La Fille du Régiment and Manon and always have high expectations before his work. On this occasion the expectations have been followed by disappointment, as so often happens. It tells the story in an environment dark and grey, depriving the whole colorful scene, which can be understood in the Antonia Act, but not in others and, particularly, in the Giulietta. The scenery of Chantal Thomas offers a series of reversible panels, whose ease of movements get that scene changes have a great speed, but offers not much more interest. In fact, what happens is that ease of movements of the decorations makes scene changes almost continuous, tiering so much movement. In general, there are many inside scenes, with closed walls. Clothing is also due to Laurent Pelly and responds to the time of the premiere of the Opera (1881) and it is unattractive. The best of the production consists in the movements of the doll Olympia, both in his boot in a basket of a large crane (like la Fura dels Baus in the tetralogy of Valencia) as in its evolutions later, skating in his Duet with Hoffmann. To this we should add the notable game that brings the surprise appearances of Dr. Miracle in the Antonia Act On the contrary, the prologue, epilogue and, above all, the Giulietta Act, have very few interest. Finally, Joel Adam lighting works well, taking advantage of the dark environment of the entire production. It is a free originality make that Hoffmann kills Giulietta at the end of the Act of Venice.
The musical direction was entrusted to the French Stéphane Denève, whose reading I was adequate and up to good, except some excess of volume. To his orders he had a good performance from the Orchestra of the Liceu, which seems to be improving compared to past seasons. . I suppose it beguins to show the hand of its owner, Josep Pons. Musical and stage direction; flawless, the Liceu choir, one of the major pillars of this theatre.

Initially, the protagonist of the poet Hoffmann role was entrusted to the Italian Vittorio Grigolo, but, for reasons unknown to me, canceled some time ago and the substitute has been the American Michael Spyres, which proved to be an insufficient interpreter of the character. More than 3 years ago Michael Spyres sang in Bilbao the character of the apprentice in Billy Budd, leaving a positive impression, although it was a very secondary role. Since then, American has followed an ascending career, having faced characters of vocal complexity, as Raoul in Huguenots or the same Baldasarre in Ciro in Babylon last summer in Pesaro. His step by Hoffmann is a mistake. Spyres is a Light-liric tenor and Hoffmann needs a voice of greater weight. Just remember that the last Hoffmann at the Liceu were Alfredo Kraus and Neil Shicoff. Michael Spyres offers a voice attractive and somewhat reduced in size, which is having more and more problems at the top of as tessitura as the representation advances. The problems began in the Antonia Act and made us fear the worst at the Giulietta. He can operate in other Repertory, but not Hoffmann.
The Canadian mezzo soprano Michèle Losier offered a sexy voice on the characters of the muse and Nicklausse, managing well her instrument. The biggest problem in her case is that the voice is very small for a large theatre as the Liceu. In the barcarolle was hardly heard.
Natalie Dessay was announced as the sole interpreter of 4 opera heroines, but already some time ago that he thought better of it and decided to deal only with the part of Antonia. French soprano continues to be a great singer, but fails to be a light soprano – for some, a lirico-ligera – that is even insufficient for the character of Antonia. She was a very remarkable actress on stage, as she has always been.
The American Kathleen Kim was the interpreter of the doll Olympia and had an outstanding performance. Perfectly to the point in terms of vocal and very off-hand onstage. An excellent choice.
The Russian soprano Tatiana Pavlovskaya offered a dark and atractive voice on the character of Giulietta, but unnoticed in its interpretation. It is those voices that one soon forgets.
Laurent Naouri has interpreted many times 4 Devils (Lindorf, Coppelius, Dr. Miracle and Dapertutto) and showed a great scenic nonchalance. Vocally, he was, with its known problem of having the top notes too whitened.
In the supporting roles should highlight the contribution of Carlos Chausson in an excellent Crespel. Well, as always, Francisco Vas in the four cameos(Andres, Cochenille and Frantz Pitichinaccio), particularly amusing in the interpretation of the couplets of Frantz. Good performance of Manel Esteve Madrid as Spalanzani. Susana Cordón was a not particularly bright Stella. Adequate, Salomé Haller as Antonia’s mother. Isaac Galán was well as Schlemil (very cut in this version) and Hermann. Correct both Alex Sanmartí (Luther) and Airam Hernández (Nathanael).
The Liceu offered a good look, with an entry maybe above 95% of the capacity. Just there was applause to open scene, except for Olympia and the couplets of Frantz. In the final reception there was brave to Kathleen Kim, Natalie Dessay, Laurent Naouri.
The pageant began promptly and had a total time of 3 hours and 45 minutes, including two intermediates of 53 minutes in total, as well as a very brief stops for scene changes. The purely musical duration was 2 hours and 50 minutes. The final applause lasted for nearly 6 minutes.
José María Irurun
Fotografías: Cortesía del Liceu de Barcelona
Copyright: a. Bofill 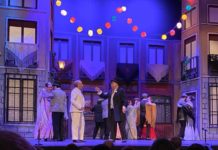 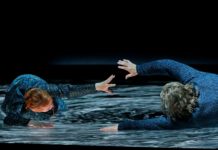 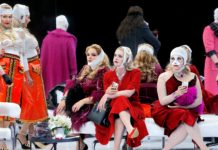