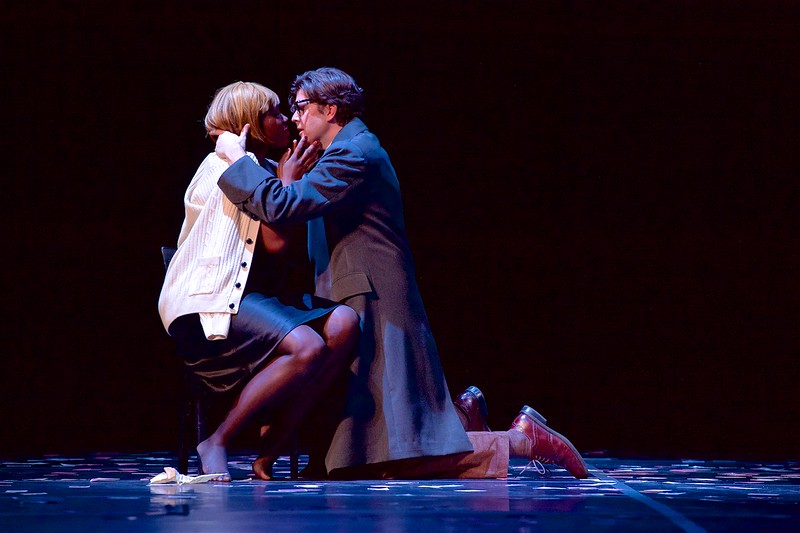 SO patrons discovered a completely different view of this well-known love story. Mr. Konwitschny proposed a rendition which differs radically from Verdi’s aim and even denies some of its key points. He eliminated some important scenes such as the dance at Flora’s party in the Second Act and the Carnival Chorus in the Third and removed a number of lines from Piave’s libretto in order to make it match with his fanciful reading of the drama. In Konwitschny’s version, Violetta is not a woman in love but a woman in pain who tries to scape her oppressive social circle by dating Alfredo. The poet is also caricatured as a clumsy and boring intellectual. The duel between Alfredo and the Baron was not even mentioned and Verdi’s time and space were turned into a blurry vortex. Obviously, Verdi’s music opposed all these ideas resiliently to the point that Mr. Ranzani struggled to match the orchestral sound with the attitudes of the characters on stage.

Apart from those licenses, the production achieved great dramatic results with very few props. Namely, a series of red curtains that jailed Violetta into an asphyxiating environment, a black chair that aimed to symbolize Violetta’s mortal illness and the chorus itself. The performance of the Seattle Opera Chorale was outstanding both vocally and theatrically. They provided dramatic sense to the production, portraying a toxic society that was the trigger of the action.

The role of Violetta was played by two quite different sopranos: Corinne Winters and Angel Blue. Winters was the opening evening’s star as she performed a flawless Violetta. Winters achieved a convincing portrayal due to her terrific technique and her tasteful approach to the character. Angel Blue was less imaginative vocally but she showed her acting skills in a very committed performance. However, her wide and dense voice did not have the flexibility required for the role.

Tenors Joshua Dennis and Zach Borichevsky played Alfredo Germont. Dennis received the plaudits of the patrons to his musicality and elegant vocal line. His legato was outstanding. Borichevsky’s well-tuned voice and attractive on-scene presence fulfilled successfully the challenges of the role. However, the Philadelphia born tenor resorted to some ugly portamentos which tainted his performance.

American baritones Weston Hurt and Stephen Powell were both convincing in the role of Alfredo’s father, Giorgio Germont. Hurt’s bronze-like voice combined magnificently with Corinne Winters’ fine vocal nuances in their duet of the Second Act. That was probably the best moment of Saturday’s performance. Baritone Stephen Powell’s voice was large, dark and homogeneous. He featured a terrific power on stage and convinced the Seattle audience with his strength despite a rather forced vocal delivery.

Experienced maestro Stefano Ranzani chose the correct tempi and underlined correctly the main ideas on the score, which unveiled clearly the inconsistencies of Peter Konwitschny’s setting.

SO patrons had finally their dose of European régie opera. It seems to be impossible to escape from this trend that puts stage directors’ whims ahead of composers’ original ideas.