On January 6, the Palm Beach Symphony paid clever tribute to its thirty-ninth season with a concert consisting of four works tied to the number 39.

“Forever 39,” the symphony’s second performance of the season, took place at theFlagler Museum’s Kenan Pavilion, with Railcar No. 91 flanking the musicians. Although listeners might expect an echo in the high-ceiling Beaux Arts gazebo, the venue offers surprisingly nice acoustics.

Dvorak’s “Czech Suite, No. 39,” for instance, was a delightful opener that gave every section a spotlight moment. The finale concludes with the booming sounds of a pounding timpani that triumphantly filled the room.

The most anticipated work in the program was the second piece, Joaquín Rodrigo’s “Concierto De Aranjuez.” The work features a classical guitar solo throughout its three movements, which was played by guest artist Sebastian Acosta-Fox, a young Miami native giving his first performance with the symphony. Written in 1939, the composition was inspired by the gardens at the Palacio Real de Aranjuez.

The concierto’s second movement, an adagio that follows an animated flamenco, is the most recognizable part, heard in many movies and commercials. An English horn first plays the prominent melody, which then echoes back and forth between the guitarist—who varies playing it in two octaves—and other soloists. Dark and dramatic, it is in stark contrast to the third and final movement, a spirited country dance.

Throughout the concierto, Acosta-Fox displayed great talent and technical skill—not to mention enjoyment, softly nodding his head as he strummed and swiftly picked with ease. Yet the guitar and symphony were offbeat with each other during parts of the final allegro, although it’s not clear who was at fault.

Following an intermission, Acosta-Fox joined the audience for the final two performances. Haydn’s “Symphony No. 39” was a pleasure to hear but even more to watch, as conductor Ramon Tebar—one of the youngest Spanish directors of his generation—is as animated as the music. It’s clear why he won the 2013 Henry C. Clark Conductor of the Year award: He doesn’t just keep time but also inspires emotion within the musicians, getting them to deliver. Tebar loves being on the podium, and his expressive movements bring the music to life and draw smiles.

Our only criticism: Tebar received no introduction and didn’t address the audience. We would have enjoyed hearing an explanation of or story behind each piece and seeing more of Tebar’s personality when he’s not conducting.

The program concluded with Mozart’s catchy “Symphony No. 39,” which features parts that race as fast as Flagler’s train once did. The fourth and final movement, an allegro in 2/4 time, is full of runs and shows off the symphony’s strings. Quite simply, they are amazing.

The evening doesn’t have to end after the standing ovation, though. Symphony patrons who are sustaining members ($1,600 contribution) or above enjoy an après dinner after each concert. Like the performances, each dinner takes place at a different Palm Beach venue. A prix fixe menu is served, and guests dine among talent—Tebar, Acosta-Fox and lead symphony musicians were among the diners at Club Colette after the Flagler Museum performance. It makes for a well-rounded, enjoyable Palm Beach evening and a lovely way to end the night. 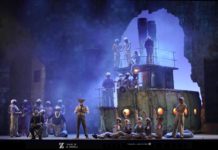 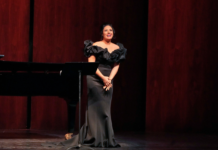 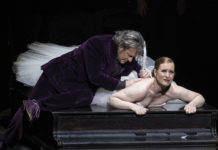