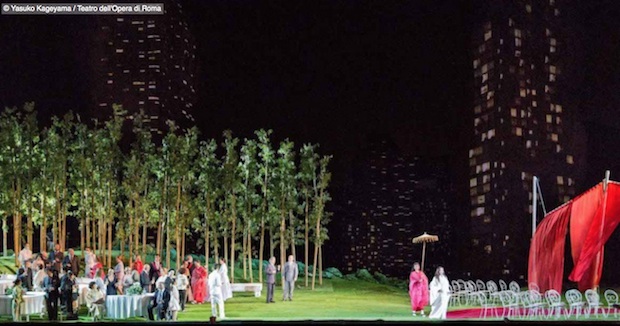 This summer, as with every summer, Opera di Roma offered us a series of outdoors operas, dedicated to the genial composer Giacomo Puccini. The backdrop could not be more suggestive: the ruins of Caracalla, traces of the omnipotent Roman Empire that was devastated over centuries.

Richard Wagner once stated that opera was the total masterpiece (Gesamkunstwerk, in German), the perfect union between multiple disciplines: music, literature, poetry, theatre, scenography, architecture, etc. Indeed, the audience that attended this production in Caracalla could have irrefutably verified this artistic symbiosis: Cio Cio San exhibits a decline from beginning to end, when she suffers the ostracism of her family for repudiating her Japanese culture and she kills herself when she realises that her love was unfounded. We could say that this personal decline is magically represented in the ruins of the Baths of Caracalla, a clear allegory to the decline and ultimate destruction of a millenary civilisation.

Alex Ollé’s scenic production (La Fura dels Baus), moved the audience by using a subtle dialogue between three different cultures: the Japanese, the American and the Ancient Roman. The monolithic stones of the ruins were transformed into skyscrapers in specific moments of drama by using projections.

Aesthetic sobriety and anachronism were the dominant points of Alex Ollé’s production. In the first act, a poetic, undulated landscape crowned by trees housed the marriage scene and joined perfectly the sensuality implicit in the role of a 15 year old Japanese girl. In the second act, an austere traditional house in the middle of the forest painted the bitter end of Cio Cio San.

The risky decision of conceiving the story in anachronistic terms by translating it into our contemporary society was achieved brilliantly by Alex Ollé, reminding us that romantic disappointment is a timeless feeling. From this perspective, Pinkerton was a stock dealer, and Cio Cio San was a contemporary woman, something that everybody could understand in the celebrated aria Un bel di vedremo: the protagonist opened her kimono, showing a tight t-shirt with the American flag, shorts and all her body covered with plenty of tattoos, a real scenic shock for everybody, quite difficult to forget. 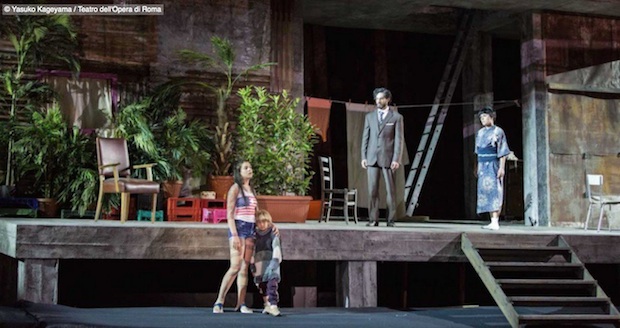 The spectacular work done by Susana Gómez deserves special mention; during the rehearsals, she demonstrated her total command in gestural language and transmitting her brilliant ideas to the cast in the clearest manner.

Maestro Yves Abel offered a masterful performance of the work, very difficult to surpass. His experience as a conductor acclaimed in the most important theatres in the world gave us a genial lesson of vocal accompaniment: his arms breathed with the singers’ fiato in a total and mystic conjunction.

Yves Abel demonstrated an absolute comprehension of Puccini’s psychological and theatrical language as well, involving himself in all the scene rehearsals and explaining to every singer, with humility, the subtleties of the libretto in every single moment of the opera.

The total command of the agogic flexibility was another impressive quality demonstrated by Maestro Yves Abel: the superb control of rubato was particularly evident in the most critical and complicated moments in the opera, like the love scene at the end of the first act, that was simply sublime. On the other hand, the technical difficulty caused by the amplification with microphones was resolved splendidly by the conductor.

An outstanding vocal cast was lead by two very different prima donnas: Asmik Grigorian and Donata D’Annunzio. Donata D’Annunzio showed the extraordinary beauty of her timbre in every register, her total command of filato and mezza voce and the elegance of her scenic presence. Opposite to the more traditional D’Annunzio’s interpretation, Asmik Grigorian surprised us with a lecture that seemed to be new in a lot of moments: heart-breaking intervals and a voice with indescribable possibilities allowed Grigorian to become the queen of the vocal cast. But we should not skip commenting on Grigorian’s theatrical qualities: a real actress, a beast of the scene, a tragic soul who could soon become the next Anna Netrebko. The projection of her voice, maybe too light in the low and medium register (which was not perceived during the concerts due to the amplification), will probably gain considerable projection as she matures.

In the first concert, the tenor Angelo Villario performed the role of Pinkerton with great charisma and a lot of security in the multiple risky high-pitched passages. Anna Malavasi sang Suzuki with composure and strength, transmitting a moving feeling in the last scenes with Cio Cio San.

Anna Pennisi, the other Suzuki of the cast also deserves special mention. This very young Italian mezzo soprano exhibited her spectacular vocal qualities in every moment and the immense beauty of her voice, full of harmonics and malleability, thus demonstrating that she is perfectly ready to shine in the main world theatres with the great roles written for mezzo: Charlotte, Rossina and Carmen.

Mortier sinks on the deficit and debt the Teatro Real