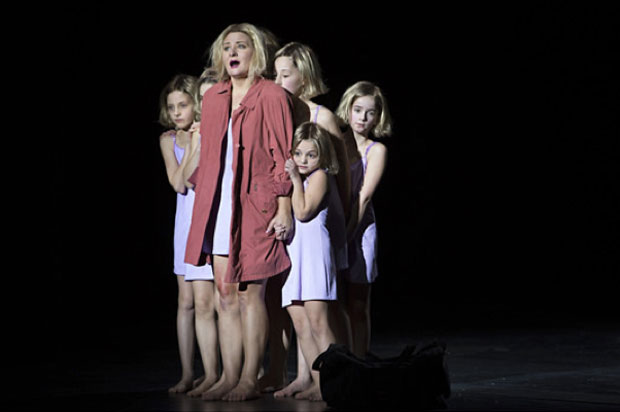 This representation of the Angel of Fire is from those that justify a trip and not only by the rarity of the title, but by the quality of it, based on an excellent musical performance and an extraordinary scenic spectacle. The vocal cast is not at the same height, but that is well known by those who frequent the Komisch Oper of Berlin, where there is a stable company of singers without big names, similar to what happens in the Vienna Volksoper or at the Gärtnerplatz of Munich.

The Angel of fire is a fantastic opera by Sergei Prokofiev, which premiered in 1955 in Venice, and it surprises that this composer’s operas are so unusual in the large theatres. The Angel of fire, in a production as the one seen in Berlin and with a proper musical direction, would triumph in any Theater in the world. It is a new theatrical production of the Australian Benedict Andrews, director of wide experience, which lately is devoting attention to opera. Apart from this Angel of Fire, it should be noted, among other works of his, Caligula (Detlev Glanert) in London and Macbeth (Giuseppe Verdi) in Copenhagen. The scenic work performed in the opera that we are discussing is a real find and an example of what can be achieved with imagination, good taste and in-depth study of a score. The scenery of Johannes Shütz makes great use of a revolving stage, in which there are no more sets than simple removable wood panels and some elements of props. It is commendable the profit that Benedict Andrews obtains from the group of sceneshifters, changing to view the rare scenic elements, and that all of them are dressed as the protagonists of the opera, Renata and Ruprecht, giving more haunting and oneiric character to the entire production. The wardrobe for Victoria Behr is colorful and attractive, well suited to the plot of the opera, highlighting the work carried out in the final scene of the convent. Very good also, was the lighting of Diego Leetz. 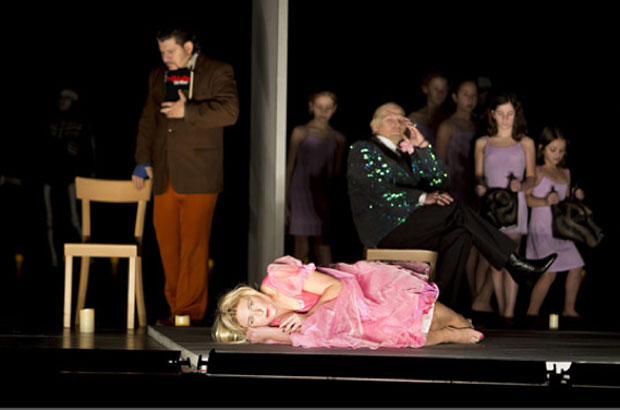 La stage direction by Benedict Andrews is spectacular. He brings the action to modern times, but is very respectful with the plot and shows a deep understanding of the score. It is neither more nor less than a great work in the service of the music. The direction of actors is spectacular, both soloists with the group of extras, stagehands, children and choir. A real example of what should be a modern stage production, whose cost has to have been rather low, but which has had to require numerous tests so that everything has showed so full of care in the staged. The only debatable from the show is to have offered the opera without interruption, when perfectly supports an intermediate.

The musical conduction was entrusted to the Hungarian Henrik Nánási, which is a 38-year-old authentic reality. Today his presence is quite frequent in major opera houses and has nothing strange, since he is an excellent conductor. The Angel of Fire needs a baton of the highest level to triumphantly out of a theatre of opera and Henrik Nánási has fully succeeded. The Orchestra of Komisch Oper under his orders seemed much better than what I had heard in the past. Also to be highlighted the performance of the choir, which embroiders his intervention in the last act. If scenic and musically we have witnessed a magnificent representation of opera, it is not the same with the vocal cast, which is not exceptional. It’s a shame that the great singers do not pay more attention to operas by Prokofiev. Renata, the protagonist of the opera, was the Russian soprano Svetlana Sozdateleva, who offered a very convincing interpretation of the character of the woman possessed by the devil. This character is one of the most complicated that can be offered in a scenario, since practically sings nonstop during the two hours of opera and also has to be a notable actress. Overcome all these difficulties has an exceptional merit and she gets it fully. In terms strictly vocal voice she is not a great beauty and is tightened on more than one occasion, but I repeat that Renata is not a character within the reach of any soprano.

Ruprecht was portrayed by baritone of Azerbaijan Evez Abdulla, who gave a good performance. His voice has amplitude and an attractive timbre, being a notable interpreter. If he improves its broadcast, he is a baritone who may have a lot to do.   The bass Jens Larssen was a suitable interpreter of the Inquisitor and the mute role of count Heinrich. Good performance also the tenor Dmitry Golovnin as Mephistopheles.

The theatre offered an occupation of about 90% of the capacity. The public devoted a very warm welcome to artists in the final greetings, the biggest ovations dedicated to Henrik Nánási and Svetlana Sozdateleva. Representation began 7 minutes late and had a total time of 1 hour and 59 minutes, including some brief stops between acts. Musical duration was 1 hour and 55 minutes. Seven minutes of applause. The price of the most expensive ticket was 68 euros, having auditorium seats for 38 euros. The cheapest ticket was 12 euros.