Richard Strauss is one of those composers who for his lyrical creations resorted to arguments of varied origin. Biblical, mythological subjects, rococo chronicles, fantastic, autobiographical stories and up to musicological thoughts aroused his interest and gave rise to some of the most important works of the repertoire.

Such heterogeneity is, however, a common thread and is the reflection of  human spirit, its meaning and its essential conflict. Behind the argument, dramatic situations, always appears the will see and understand of the Man through the various conflicts, of various why, that arise throughout life. To reflect so he counted on furst order librettists and the case of Hugo von Hofmannstal could be considered as exemplary. The quality of the texts of the poet are always at the same level of the score of the musician.
«Frau ohne Schatten» case is paradigmatic and shows us the mastery with which both creators sought a material that at first sight has few operatic possibilities.

The fantastic argument arising in scene acts as a metaphor for a transcendent philosophical depth issues. Every scene is full of symbols that turn concrete to more abstract ideas and reflection on the human condition is discovered behind a history of pure fantasy. In this sense we can establish a point of contact with Die Zauberflüte and thus, while Mozart used a singspiel to develop fantastic argument, Strauss created an opera in three acts with levels of difficulties both in the Orchestra and voices that return one of the more complex works in the German repertoire. The fact that, despite its both argumental and structural complexity has not turned piece into an unpalatable one, speaks of mastery of the composer when it comes to managing resources and ideas in a way to achieve a balance that kept the dramatic tension atthevsame time that witness its evolution.

The Teatro Colon in Buenos aires has once again put in scene «The woman without a shadow», which was missing its stage since 1979, giving us, so far. the best result of the season.

Interesting implementation of Andreas Homoki, coming from the Nederlandse Opera in Amsterdam, knew how to combine the artistic beauty with the significance of the text.

Minimalist trend and strong symbolic connotation, the scenery and costumes for Wolfgang Gussmann well illuminated by Frank Evin, created the framework for performing that eliminated anecdotal details and pointed to the depth of the work.

The cast was to rise to the challenge, keeping a respectable benefit, with some interpretations or some voices of greater splendor than others, but who knew how to surrender and create a good show.

Without reaching the height of  Nilsson or Marton who were able to give life to the protagonists in the «Golden yesterday» (why to compare…) the quality of the artists of these functions is not inconsiderable and their value tests the amount of commitments faced this season in Europa.
In the function that occupies us, female performers had more interest than men performance.

Elena Pankratova gave us a wife of Barak’s good flow and confident acutes, with a voice that runs easily through the room and a very ductile scenic rendering, though somewhat one-dimensional.
Manuela Uhl was a delicate Empress of pleasant timbre and somewhat limited in the bass but good centre and interesting media voice record.
The nurse of Iris Vermillion was embodied with art from both vocal and scenic side as though her voice is not of the same quality in all the registers.
Jukka Rasilainen as Barak sang with intention and commitment although it would have desired one greater flow to overcome the dense orchestration and the dimensions of the room.
The Emperor of Stephen Gould wasn’t bad, although it cannot be especially distinguished. His voice sounded somewhat uneven but with interesting an extension and a Bell.
Bravo spirit Messenger Jochen Kupfer, attained in all senses.
The remaining characters were served with solvency by Argentine singers demonstrating, once again, how much talent keep our artists waiting for spaces were they can fully develop.
The choir of children realized their quality and the same can be said of the Orchestra, although the conduction of the Maestro, Ira Levin was not far from conventional, missing many of the subtleties involved in the score.

A room filled cheered the performers after this lucky «Frau ohne Schatten» return to the stage of the Colon. 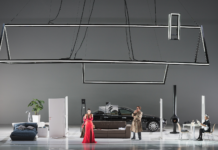 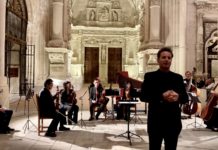 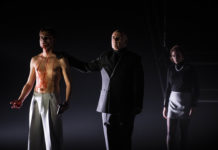