The opera season at the Capitole comes to an end, as Italians would say, in bellezza. If Rameau’s Les Indes Galantes was a real feast for the eyes, Tannhäuser was one for the ears. Both performances were anchored in great performances in the pit of the theater. After a few erratic years Toulouse has recovered its old splendor and today it can be considered the leading opera house in France after its capital.

For this Tannhäuser the Capitole has commissioned a new production from Christian Rizzo who comes from the world of dance. The sets were minimalist, with the first act set on an empty stage; the singing contest in the second act in a big marble hall with pillars. The last act returns to a bare stage, except for a large stone where Elizabeth prays for her beloved Tannhäuser. Most outré are the complicated costumes and strange wigs which were not to my liking. Performed in the so-called Vienna version of 1875, this Tannhäuser included the ballet, although not a particularly attractive choreography. The action takes place in a timeless atmosphere and Christian Rizzo’s direction of his actors does not go beyond tradition, aided by very experienced singers.

Hartmut Haenchen was simply superb on the podium. I have recently enjoyed his interpretations of Salome (Covent Garden) and Lady Macbeth from Mtsenk (Teatro Real), but his Tannhäuser topped that. Indeed, it was one of the best in musical terms that I have witnessed live. Right from the overture it was clear that we were going to attend a great performance. Mr. Haenchen was also immensely careful with the voices on stage, which were never covered by the orchestra. The orchestra was in top form and delivered one the best performances I can remember hearing in Toulouse. The large chorus played along by being excellent, too.

The cast was as good as can be heard in any opera house these days, although not all the singers were outstanding. But then that’s a reality also found anywhere.

Torsten Kerl was supposed to have sung Tannhäuser, but had to cancel and was replaced by Peter Seiffert who had just sung this role two days before and would do it again on the 26th. I have been lucky enough to see his Tannhäuser several times in the past and found him absolutely convincing again, this time around. Seiffert overcame all the difficulties of the role with ease, from the challenges of the Venusberg to the endless narration of Rome, intermittently navigating the fearful end of the second act safely, where many of his colleagues have to push so much. He did all that, and never stopped singing. Even his large vibrato at the top of the range seemed much more controlled than on occasions before. He is my Tannhäuser-reference nowadays, alongside Stephen Gould and Johan Botha.

Elizabeth was played by Petra Maria Schnitzer, whose vocal evolution in recent years has been more positive than expected. She is improving with time, like good wine. His portrayal of Elizabeth was really good, short of emotion at the prayer of the third act but powerful and convincing throughout the second act. Wolfram von Eschenbach requires a true singer to do justice to the wonderful song of the Star, one of the most inspired pages ever composed by Wagner. American baritone Lucas Meachem was excellent, singing with feeling and emotion and giving the character the nobility he requires. It has been two years since I saw him in Die Tote Stadt and I found him much more mature and profound in his interpretation now than I did as Frank/Fritz then.

Jeanne-Michele Charbonnet in the role of Venus was the weakest part of the cast. Although the tessitura of this character lies more comfortable for a soprano, she was rather tight in high notes—but thankfully within the parameters of a fine interpretation. Finally, Christof Fischesser was an irreproachable Landgrave, indeed one of the very best performers today in the role. He sang with good taste and he showed a noble voice that gets lighter toward the top. Among the supporting cast Andreas Bauer was a sonorous Biterol and Maxim Paster made a good Walther. Although this was nominally the Vienna version, the latter sang at the contest, as he would in the Dresden edition. 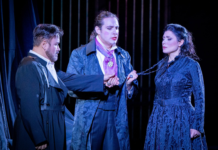 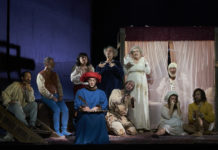 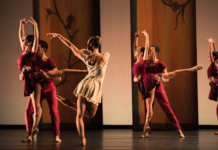