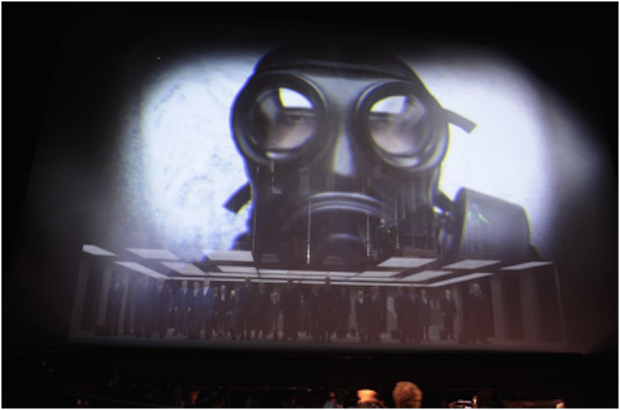 More than twenty years separate the new production of Un Ballo in maschera from the last production (in 1992) at La Monnaie. This time round it is the Italian Verdi specialist Carlo Rizzi, who will lead the La Monnaie Symphonic Orchestra and Choir, along with a very impressive cast. This team will bring one of the most acclaimed scores of Verdi’s middle period to life, in which dramatic expressivity and Italian lyrical flair come together to give voice to a rich spectrum of primal human emotions.

After his productions of Le Grand macabre (Ligeti) and Œdipe (Enescu), Alex Ollé brings yet another ambitious concept to the stage of La Monnaie. The director of the Barcelona theatrical group La Fura dels Baus, brings the personal deadlock of Verdi’s Swedish king Gustavo III to the level of a broader social-political system. Right from the start, the video projections during the overture make clear that we find ourselves in a undefined near future, where science fiction and a modern, populist dictatorship have entered in a worrisome coalition. The intrigue of friendship, betrayal and an impossible love is set in a dystopian nightmare, recalling George Orwells uncanny 1984. It is an absolutist masquerade, in which a totalitarian political force recycles itself continuously at the expense of the anonymous, de-humanized masses. Only in the shadows of the megalomaniac architecture, a small group of “indignados” keeps desperately searching for the spare rests of authenticity and revolt.

Gustavo III, a versatile and authoritarian leader, is interpreted alternately by the Italian tenors Stefano Secco and Ricardo Massi, who are both making their debuts at La Monnaie.

For the role of Amelia, we welcome wo other newcomers at La Monnaie: the Uruguayan soprano Maria José Siri in alternance with the Italian soprano Monica Zanettin.

Romanian baritone George Petean makes his debuts at La Monnaie in the role of friend and assassin Renato Ankarström, a role that he sung in Vienna, Hamburg, Essen, Lausanne and Liège. He shares this role with the American baritone Scott Hendricks, who has been regularly invited to La Monnaie these last seasons and was Macbeth (production of the Year 2010 by Operwelt), Jochanaan (Salome, Strauss), Giorgio Germont (La Traviata, Verdi) and Il conte di Luna (Il Trovatore, Verdi).

Riccardo’s page Oscar marks the La Monnaie debut of the American-Korean soprano Kathleen Kim. As her ‘alter ego’, we are happy to present Belgian soprano Ilse Eerens, creator of the role of the Second Girl in Au Monde, the new opera by Philippe Boesmans, for La Monnaie  in 2014.

The Canadian contralto Marie-Nicole Lemieux excels in character study, such as the roles of Mistress Quickly (Falstaff, Verdi), Azucena (Il Trovatore, Verdi) and Ulrica Arvidsson, which she revives for this new production