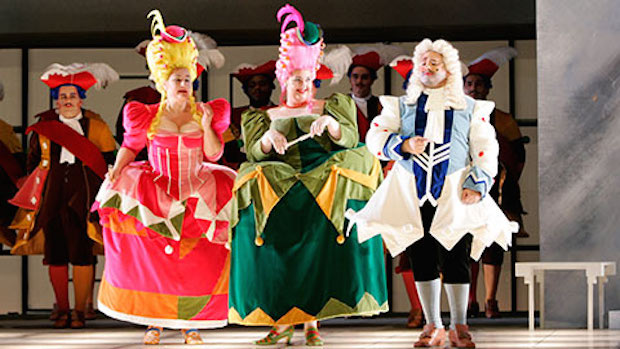 Washington National Opera (WNO) concludes its 2014-2015 season with a new-to-Washington staging of Gioachino Rossini’s charming romance—Cinderella, May 9-21 in the Kennedy Center Opera House. Starring two powerhouse mezzo-sopranos—Isabel Leonard and Tara Erraught—appearing at WNO for the first time, this dazzling production has been acclaimed worldwide for its witty characterizations, rainbow-bright sets and costumes, and rags- to-riches ending that celebrates the power of love and forgiveness. The production is staged by Spanish director Joan Font and the WNO Orchestra is led by Italian conductor Speranza Scappucci, both in their WNO debuts. The Saturday, May 16 performance will be simulcast free to thousands of fans at Nationals Park as part of M&M’S® Opera in the Outfield.

Rossini’s popular retelling of the beloved Cinderella story adds a few fabulous twists to the traditional fairy tale. A kindhearted girl named Angelina dreams of one day escaping her impoverished stepfather’s castle. When a prince announces he will choose his bride at a glamorous ball, she seizes the opportunity to escape the tyranny of her vain stepsisters and take control of her own destiny.

Audiences of all ages will delight in this clever romantic comedy that features bracelets instead of glass slippers, a philosophical tutor in place of a fairy godmother, and six adorable dancing rats that serve as a makeshift Greek chorus. Considered one of his finest vocal works, Rossini’s opera glows with captivating bel canto singing and ornate ensemble passages performed by a thrilling cast of young talents.

The stellar cast is led by two extraordinary mezzo-sopranos, both in their WNO debuts. American Isabel Leonard, winner of the 2013 Richard Tucker Award and a 2013 Grammy Award® for Best Opera Recording, is one of the most highly sought after artists in opera today, regularly appearing in leading roles at opera houses around the world. Tara Erraught, a native of Ireland, makes her U.S. operatic debut in one of her signature roles, which she has sung to great acclaim in Vienna, Munich, and Hamburg. Sharing the role of the dashing prince Don Ramiro are Russian tenor Maxim Mironov and American tenor David Portillo (seen locally earlier this season in Washington Concert Opera’s I Capuleti e i Montecchi), also both in their WNO debuts.

Italian conductor Speranza Scappucci makes her WNO debut leading the WNO Orchestra in interpreting Rossini’s brisk and playful score. She will also play the score’s recitatives on the harpsichord right from the conductor’s podium. The imaginative and bright production from the Barcelona-based theater group Els Comediants is directed by Joan Font with sets and costumes by Joan Guillén, lighting by Albert Faura, and choreography by Xevi Dorca. All of these Spanish artists make their WNO debuts with this production.

The May 16 M&M’S® Opera in the Outfield presentation of Cinderella will begin at 5 p.m. with special “pre-ball” entertainment, including a royal parade, a meet-and-greet with M&M’S® Ms. Brown, photo opportunities with living statues of Babe Ruth and characters from Cinderella, a costume trunk and face painting play area, chances to win prizes from M&M’S® and the Kennedy Center, and more. The opera will be broadcast live from the Kennedy Center

Opera House to the high-definition NatsHD scoreboard at the ballpark at 7 p.m. Free seating will be available on the outfield grass and in the stands. The event will take place rain or shine—in case of inclement weather, some covered seating is available. Complete information and programming for the May 16 M&M’S® Opera in the Outfield free simulcast will be announced shortly.

Washington National Opera’s 2015-2016 season includes a new-to-Washington staging of Bizet’s Carmen, the world premiere of a newly revised version of Appomattox by composer Philip Glass and librettist Christopher Hampton, a revival of WNO’s charming holiday production of Hansel and Gretel, the company premiere of Kurt Weill’s Lost in the Stars in a gripping production from Cape Town Opera, and WNO’s first complete staging of Wagner’s extraordinary four-part Ring Cycle, with a world-class cast under the direction of Francesca Zambello and featuring the WNO Orchestra conducted by WNO Music Director Philippe Auguin. Subscription packages are available now.