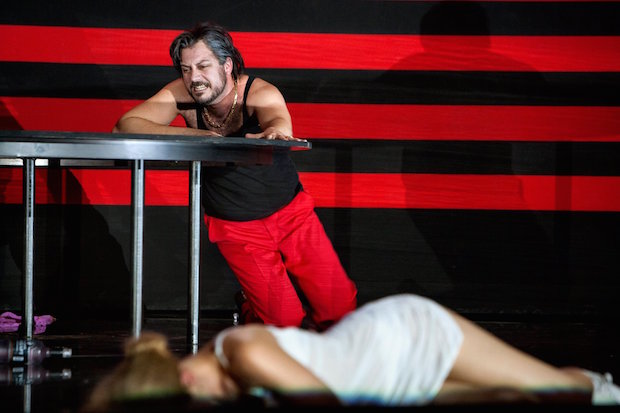 Seemingly unaware of his emerging opera star status, nor spoiled by the minutes-long standing ovation he enjoyed only half an hour earlier, Ante Jerkunica very punctually enters the cafe where we meet for an interview. He’s only 37, but his physical appearance is as impressive as the career he’s making. While we order something to drink he says «Nice to hear that you are impressed with our production». As if his contribution does not exceed that of the tiniest cog in the production machine. An interview with an exceptional singer.

An almost entirely Russian cast but a Croatian bass in the lead? You sound very Russian and your Russian is very understandable. Do you speak Russian? No, I don’t speak Russian but I do understand practically everything. My mother tongue, Croatian, is a Slavic language. The two languages are very similar.

But the way you played a Russian oligarch looks so very Russian, so authentic. Do you have a Russian connection, through relatives maybe? No, I don’t, but I did study this role with a Russian coach. I also worked intensively with director David Alden on the character of Ivan Khovanski. I always try to come to the first rehearsal with a very open mind. I don’t finish the role in my head at all. This way I feel more open to the concept of the director. I always work that way. For debut roles as well as for roles that I have sung before. It’s not very exciting to rigidly stick to one particular interpretation of a role. I find it more interesting to work from new angles. I guess that’s why I still like my job so much. Of course, this openness sometimes has its disadvantages. (he laughs) A few years ago I was in a production and had just one aria at the end of the opera. However, the director wanted me on stage from the start of the opera right until the end. I thought it was important to go along with his vision, though honestly I didn’t really get the concept. After being present at every single rehearsal for five weeks, the director changed his mind. He decided he would only have me on stage for my aria at the very end. When you hear that, after five weeks of rehearsing….. (he shakes his head) Let’s say that it wasn’t a very nice experience. But that’s life.

What was it like to work with David Alden? You know, I always try to do what directors want from me. Only, sometimes I really don’t understand what exactly it is they want. Sometimes it’s difficult to grasp their intentions or concept. With David Alden that was not the case at all. We were on the same wavelength and his ideas were very clear to me. Although I must admit that in the beginning I was a bit uncomfortable with his idea to make me dance at the end. (Alden cancelled the ballet of the Persian slaves and makes Khovanski dance) Honestly, this dance was really a challenge for me.

Were there other challenges in the role of Ivan Khovanski? Well, technically speaking the role is quite complex, because Mussorgsky wrote it mostly on the passaggio ( the break between the vocal registers). That’s tough, but at the same time it is a wonderful role. You know, before accepting a role I always take two weeks to make up my mind. I look at the role and the character. Only if it feels good, if I feel that the role is right for me, I accept. However, additional challenges can still emerge afterwards. Like the dance for example, but also the fact that the performances were scheduled so close together. I have six performances and a dress rehearsal within a time lapse of eleven days. Especially with a role as demanding as Khovanski you start feeling tired after a few performances. It’s not so much the voice that gets tired, it’s your body that takes a heavy load because there is not enough time in between performances to fully recuperate. To be honest, I would have liked to have had some more days between performances, but then again, that’s life.

This production by David Alden and the theme of Khovanshchina is very topical. Unfortunately, the story is more topical than ever. We always think that we learn from history, but unfortunately that doesn’t seem to be the case. The story and the characters from the opera could just as well have come straight out of the news on television. I cannot express my opinion on politics but I really regret the tensions between Russia and the West. Russia has given us a lot culturally. Great writers, composers, artists. We must not forget that.

Besides the Russian repertoire you often sing Wagner. That’s right. Soon I will make my debut in Tannhäuser in Deutsche Oper Berlin. Recently I sang Titurel in the productions of Parsifal in Gran Teatro del Liceu in Barcelona and at the Concertgebouw in Amsterdam. Last year I also toured with the Cologne opera to Shanghai in the role of Fafner in Das Rheingold and Siegfried. Wagner voices are not very common, so when opera directors know that your voice is suited for it, they don’t let you go anymore …. (laughs) But I would also like to sing more Italian repertoire. For example, one of my dream roles is Felipe in Don Carlo (Verdi). But that is not imminent, I still have plenty of time to evolve towards roles like Felipe and Boris Godunov. All in good time.

Indeed, you are not yet 40, but recently started your eighth season in the ensemble of the Deutsche Oper Berlin and you have an impressive CV. You obviously started your opera career very young. As I prepared this interview I ran into a video on Youtube from the mid 90’s. You’re very young there, a teenager, but surprisingly enough your voice and basic technique were already in place. Oh no, did you find that video on the Internet? (laughs) Yes, I was still in school at the time. I was about seventeen and had my first singing lesson about a month prior to this recording. You know, I played the organ in church and sang in the chorus. People said I had a voice and so I started taking lessons.

When I saw the videotape I was convinced at least one of your parents was a singer and you had been trained from an early age … No, my parents aren’t singers. There aren’t any musicians in my family, only a few painters. The voice was just there. Like a God-given talent. But as with every talent, you have to develop it. You gradually find solutions to the challenges you encounter and start growing.

After this production you go to Paris. Yes, I sing the role of Colline in a production of La Boheme at the Paris Opera. I will be there until early January. Then I go back to my homebase Berlin. I’ll be singing in several productions there, like The Magic Flute, Samson and Dalila, Yevgeny Onegin, my debut in Tannhäuser and The Love of Three Oranges by Prokovief in a production by Robert Carsen. I just love Berlin, it’s a fantastic city. I have an apartment there, but I’m not there that often.

But your family lives in Berlin? No, my partner travels with me. We have been together for 13 years It’s great not to return to an empty hotel room or apartment after a performance. This kind of stability is very important for a singer. As a former ballet dancer my partner also knows the theater inside and out. He is my second pair of eyes and can give tips during the rehearsal period. It is interesting to keep looking for ways to improve and find new details which deepen the portrayal of your character. I again tried out some new things during today’s performance. In order to keep my mind fresh towards the character I’m creating and once rehearsals properly take off, I always start studying a new role. In this case it was Hermann from Wagner’s Tannhäuser.

I understand from our conversation that you will be back in Antwerp soon ?Yes, in the summer I ‘ll be back in Antwerp for rehearsals. I love Antwerp and Belgium. You see, I’m a huge antique lover and there are so many wonderful antique shops here! (laughs) I do not like to travel by plane, so I drive everywhere. This way I don’t remain stuck in the city centre , I can go on ‘antique hunting’. We often drive to the coast towards the Netherlands as well. I have a greyhound which needs a good run from time to time. It’s thanks to my dog that I go outside regularly. But yes, I do look forward to coming back to Belgium. Nevertheless I will have to restrain myself, because I keep buying antique furniture and our apartment in Berlin is already overloaded . (laughs)